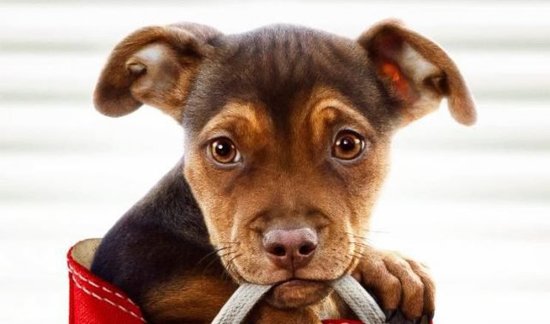 Two years ago W. Bruce Cameron's novel "A Dog's Purpose" became a smash hit, barraging us with waves of pooch-ie cuteness and pathos. No surprise that he wrote another book and they've made another movie out of it, "A Dog's Way Home."

Instead of a metaphysical musing about a dog's living through multiple lifetimes as it figures out its role in the cosmos, here the protagonist, Bella (emotively voice by Bryce Dallas Howard), knows from the get-go what her purpose is: to be there for her human, Lucas. He's played by Jonah Hauer-King, who's tall and non-threatening and has impossible dimples.

They get separated by circumstance and Bella has to undertake an epic journey across two states to find her way home. These include encounters with humans good and bad, face-offs with wolves and an unlikely partnership with a CGI mountain lion. It's a little bit scary, a little bit sad, a little bit sappy and a whole lot adorable.

I felt about this movie the same as I did its predecessor: it's a great big cream-puff of a movie, unambitious but undeniably sweet. It's the rare family picture that will please audiences from 3 to 93.

You know Bella's going to reunite with Lucas in the end, but it's still a tender moment. My 5-year-old bawled tears of joy. (Dad may have had something in his eye, too...)

Bellas begins life living in a condemned wreck of a house along with dozens of cats. When her mother is impounded by the meanie animal control officer, she's raised by a "mother cat" and later joins up with Lucas, who lives across the street and works in a VA clinic that treats troubled vets. One of them is his mother (Ashley Judd), whose depression is helped by a scrabby pup.

Because she's a pit bull mix -- although the actress dog looks more like a lab/shepherd blend to these eyes -- the Denver city ordinance prevents her from being off her home property. Transferred to a temporary stay in New Mexico with some friends while Lucas sorts things out, she jumps the fence and her travails begin.

I won't belabor all her journey, though a few incidents stand out. This includes coming across a baby cougar whose mother is killed by hunters, which allows Bella to become a cat mother herself to the critter she dubs "big kitten." For awhile she becomes the (rather coerced) companion of Axel (Edward James Olmos), a homeless veteran who's desperate for a friend.

After an avalanche fells the owner of a border collie named Dutch, Bella finds herself paired up in an ad-hoc foster family with a nice gay couple. Bella likes it there, appreciates the companionship and security. But always she feels the pull of "an invisible leash" urging her to return to Lucas.

The movie is directed by Charles Martin Smith, who knows from dog tales having starred in the lovely "The Company of Wolves" back in the day. The screenplay is by Cameron and Cathryn Michon, who also co-wrote "Purpose" and previously collaborated on a non-dog movie, "Muffin Top: A Love Story."

It's brightly-shot, with pitch-perfect animal expressions and a few decent human ones, too. What can I say? Only a certified dog-hater could dislike this flick.

Posted by Christopher Lloyd at 11:15 AM