Review: "If Beale Street Could Talk" 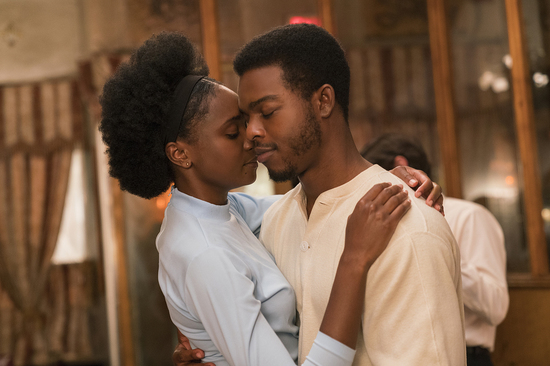 The first time Tish and Fonny (KiKi Layne and Stehan James) step into the frame of “If Beale Street Could Talk” I thought to myself, “These may be the two most beautiful humans on earth.” Writer/director Barry Jenkins (“Moonlight”) has adapted the book by James Baldwin into a lush, gorgeous film about terrible human ugliness.

There are two pieces to the movie: the romance between Fonny and Tish, and their struggle to build a life while reconciling their families; and the imprisonment of Fonny on false charges of rape, and the effort to prove his innocence. Jenkins blends these thoughtfully but not always seamlessly, as the story slides around in time and mood.

Set in the 1970s New York City, “Beale Street” is both narrative fiction and social criticism, as was nearly all of Baldwin’s work. The film examines the pernicious toll of racism on the viability of the American Dream, how people are beat down and respond to that by acting out, often fulfilling the degrading stereotypes.

Fonny and Tish have been friends since childhood, and their joining seems almost predestined. Tish is quiet and gentle, but with a band of iron she inherits from her mother (an excellent Regina King). Fonny is a budding sculptor with a kindly soul (though he isn’t above stealing tools from the carpentry shop where he briefly worked).

There are many languid scenes of the couple simply walking or staring at each other, their eyes joining in a matrimony of the hearts.

Their plans for an actual wedding are hampered: by their inability to find a landlord who will rent a loft to black people; by the objections of Fonny’s mother, who has embraced the strict edicts of the Bible but not its compassion; and finally when he is arrested for the brutal rape of a woman from Puerto Rico.

The music by Nicholas Britell and photography by James Laxton cannot be overstated in their beauty. Many sequences coast upon just these two elements and the actors’ expressions, without any significant words or actions.

The movie suffers from a surfeit of supporting characters who may have better been excised from the story. The fathers (Colman Domingo and Michael Beach) add a lot of charm but not much substance to the narrative. There are also encounters with friends of Fonny and others, some of which add to the mix and others that simply take up space and time.

One of the most moving is a run-in with a jovial presence, Daniel (Brian Tyree Henry), who has recently been released from prison. At first happy and exuberant, downing proffered beers and ribs, he grows morose recalling his two-year sentence for stealing a car -- “I don’t even know how to drive a car” -- which foreshadows Fonny’s own fate.

I find myself regarding “If Beale Street Could Talk” much the way I did “Moonlight” -- more admiration than adoration. It’s a splendidly made movie that sometimes gets stuck in its own inertia. Beautiful movies are wonderful to look at, but they’ve got to keep moving.