Review: "On the Basis of Sex" 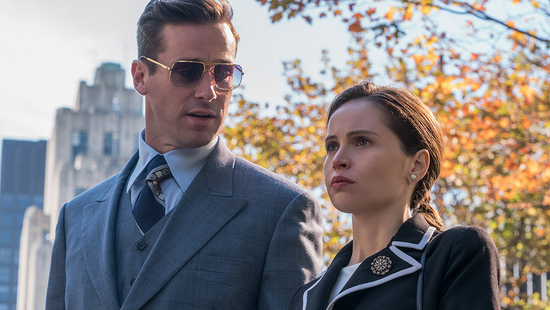 We’ve already had one movie this year feting Supreme Court Justice Ruth Bader Ginsburg, the excellent documentary “RBG.” So why not a feature film, too?

“On the Basis of Sex” is a straightforward, old-fashioned biopic-slash-courtroom drama chronicling Ginsburg’s first steps into the hallowed laws of American jurisprudence. It’s the tale of how Ginsburg, shunted aside despite graduating at the top of her class at Harvard Law School, began quietly but forcefully building a body of law against legalized discrimination based on gender.

Felicity Jones plays Ginsburg in a vibrant, assured performance of a woman raised not to make waves, but whose intellect and inner fire drove her to challenge the system. There’s not much physical resemblance, though prosthetic teeth help. Towering actor Armie Hammer is cast as her loving husband, Martin, which helps play up Ginsburg’s famous diminutiveness.

They had an interesting dynamic that was radical for a couple in the mid-1950s: both attending the same law school a year apart, already married and with a baby, equally splitting the home chores and the academic burden. When Martin came down with a serious illness, Ruth attended all his classes and took notes, as well as her own.

Still, when she graduates no New York City law firm will touch her. In one terrific little scene, the head partner of a smaller firm is clearly ensorcelled by her prodigious brainpower, but pulls back: the partners’ wives will be jealous to have a pretty young thing around the office.

The story then skips ahead to 1970, with Martin a striving Wall Street tax attorney and Ruth a professor at a modest law school. A seemingly innocuous case falls into their lap: a man sues the tax collector for rejecting his deduction of the cost of a caregiver for his elderly mother. This is something women are allowed to do, but not men.

Despite a disputed sum amounting to 200-and-some dollars, Ruth immediately seizes upon the broader possibilities: by challenging the first in a series of laws that enshrine discrimination on the basis of sex on behalf of a male client, they will open the door to years of litigation to unravel an outdated set of rules and replace them with another.

Consider that, in this same era, women had to obtain credit cards in their husbands’ names, and were forbidden to serve in any number of jobs -- completely legally and, many thought, justifiably.

Ginsburg enlists the head of the ACLU on her behalf, Mel Wulf, played by Justin Theroux as a man who’s a fierce litigator but a major pill to deal with.

“On the Basis of Sex” isn’t an especially surprising or original movie. We can feel the film moving through its beats with a carefully ordered choreography. Rookie screenwriter Daniel Stiepleman sticks a little too close to formula, and director Mimi Leder betrays some of the melodramatic influences of television where she’s largely spent the last two decades.

For instance, we know the scenes of Ginsburg clashing with her idealistic teen daughter, Jane (Cailee Spaeny), will surely be followed by their reconciliation via the court case that captures both their passions. It’s as inevitable as the sun.

Similarly, the law school professor and dean (Stephen Root and Sam Waterston) who were once Ginsburg’s prickly mentors become her adversaries for the big case, muttering in deep tones in dark-wood offices about the dangerous precedent being attempted by this rebellious female upstart.

Jack Reynor plays the opposing counsel for the big court scene, all swollen Southern swagger, and Kathy Bates cameos as Dorothy Kenyon, a pioneering feminist from before they had a name for such a thing.

Even though the film isn’t terribly bold, it still tells a story worth hearing, and tells it very well indeed. Now let’s get the Antonin Scalia biopic rolling.