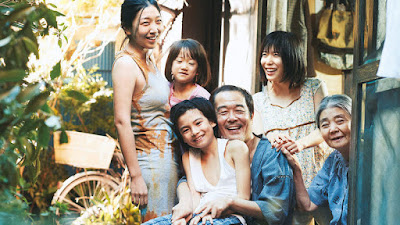 Knowing that "Shoplifters" won the prestigious Palme d'Or at the Cannes Film Festival, I was surprised at how sentimental a film it is. Cannes is in love with edgy, out-there choices for its top film award -- "The Square," "Blue Is the Warmest Colour, "Amour" and "The Tree of Life" being recent picks.

Compared to these films, writer/director Hirokazu Kore-eda's film is a big warm hug of a movie. It's about an ersatz Japanese family of petty thieves who take in a wayward little girl who's being neglected by her parents, and the tale of how she is gradually incorporated into this spirited little band.

It reminds me of post-war Italian neorealism movies, with maybe a little dash of Akira Kurosawa's "Dodes'ka-den" thrown in.

Osamu (Lily Franky) is the supposed patriarch of the clan, though not a domineering one. He's a construction worker who's been laid up with a broken ankle. The mother, Nobuyo (Sakura Ando), works at an industrial laundry service. The son, Shota (Kairi Jō), is Osamu's main pupil in theft, using hand signals and cooperation to steal from local stores. For example, one will pretend to browse nearby, blocking the view of the shopkeeper while the other filches.

Aki (Mayu Matsuoka), who's probably in her 20s, works as a hostess at a nightclub, entertaining businessmen. Hatsue (Kirin Kiki) is the grandmother, who owns the modest house where they all live. She gets by on the pension of her deceased husband, as well as guilt-laden handouts from her wealthy stepson.

As you've probably guessed, none of these people are actually related to each other. Every one of them is, on some level or another, on the make. Although they steal, they are bonded by their commitment to their little make-do family unit. Kore-eda repeatedly suggests that their affection for each other often surpasses that in clans defined by bloodlines.

Things change when they pass by little Yuri (Miyu Sasaki), who's about 5 years old, on the way home one night. She has been left out in the cold hungry while her parents do drugs and carouse. It's not the first time they've witnessed this.

Osamu brings Yuri back to their home for a good dinner and to spend the night, intending to return her the next day. But they never get around to it.

Part of it is the fact that the little girl will likely wind up starved or abused. But also, she just clicks with them. They've got a dad, mom, grandmother, aunt and rebellious preteen son, so an innocent small girl rounds out the portrait.

Even when the police start seeking Yuri and her picture is splashed all over the television, they take steps to keep her, renaming her Lin and cutting her hair. And they begin to apprentice her in the family trade.

You might be tempted to look down upon the shoplifters, but somehow we find that tender feelings have grown in our hearts for them. They may be (minor) criminals, but there's no hatred or degradation in their house.

Even their stealing has a sense of a tightly defined moral code. They're not stealing luxury items for profit, but mostly food and other essentials to help them get by. We're not surprised when it turns out the people working in the store are not as blind to what goes on as they may think.

"Shoplifters" is joyful, sad and observant. Be forewarned: this film steals hearts.