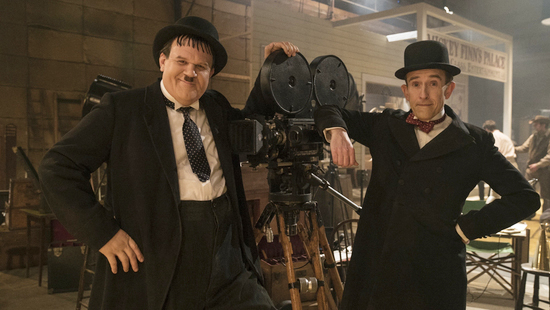 “Stan & Ollie” is a melancholy look at the relationship between one of film’s great comedic duos: Stan Laurel and Oliver Hardy. Though their place in the pop culture consciousness is closer to distant reverence than relevance these days, they were as big in Hollywood as you could get in the 1930s and ‘40s.

In their onscreen act, Oliver Hardy was the portly, overbearing one while Stan Laurel was the skinny numbskull. But as the film makes clear, in real life Stan was the stodgy brains of the outfit who wrote all their material, while Oliver was the joyful retiring sort who was happy to let his partner handle the business side of things.

They are played by Steve Coogan as Stan and John C. Reilly as Oliver. Both are completely believable, physically and otherwise, in their parts. Coogan gets by with just a little Brylcreem and altering his voice; Reilly uses a fat suit and impressive facial prosthetics. We quickly look past the exterior finishing and concentrate on the souls behind the legend.

The film, written by Jeff Pope and directed by Jon S. Baird, is set in 1953 after their fame has mostly faded. Oliver is now in his early 60s and in poor health, while Stan has been cut down by his attempts to buck the Hollywood system. An opening scene from 1937 shows them butting heads with studio chief Hal Roach (Danny Huston), demanding more money, which briefly led to them splitting up the act for a time.

It’s all water under the bridge for Ollie, but Stan still has a chip on his shoulder. He’s organized a stage tour of the United Kingdom, which is to build hype for a film they’re planning to shoot playing off the Robin Hood legend. They keep working on different bits for the movie, even though the man in charge of putting the financing together isn’t returning Stan’s calls.

What this lovely film shows is how people can be a perfect fit onstage but not really get along off it. They don’t detest each other or anything like that. They’ve played golf and double-dated with their wives -- whichever ones they had at the moment; both men have married and divorced repeatedly, which has cut into their finances -- without ever really becoming true friends.

Comedy is their shared language and point of reference for, well, everything. Playing seedy theaters before small audiences and staying in third-rate hotels, they make a joke of their circumstances while seething about it. But at the urging of the vaguely slimy producer handling the tour, Bernard Delfont (Rufus Jones), they do some publicity stunts in the different locales.

The crowds start to get bigger, and the boys find themselves actually enjoying working together again. What's more, they find themselves bonding in a way they hadn't before.

Around the midway point “the girls” arrive: Stan’s wife, Ida (Nina Arianda) and Ollie’s wife, Lucille (Shirley Henderson). Both men finally got it right after several tries, and found women they remained married to until they died. Ida is surly and Russian, and keeps prattling about her own dubious showbiz career. Lucille is a little shy and snarky, and worries that Ollie is endangering his health with the tour.

The women soon set to bickering, but the boys are still overjoyed to have them around.

There isn’t a whole lot of story to “Stan & Ollie.” It’s the story of two guys whose stars were inseparable, but whose personalities didn’t quite mesh. And yet, they managed to create something that endures. Sometimes just doing good work is enough.