Video review: "The Hate U Give" 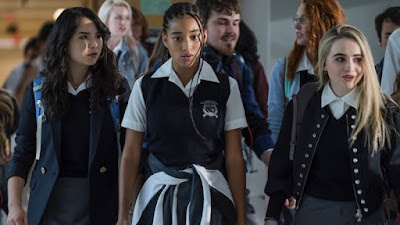 “The Hate U Give” may be the best movie of 2018 most people haven’t heard of. This smart, heartfelt and riveting drama is perhaps the finest cinematic exploration of race relations in American in the past decade.

It takes as its jumping-off point the shooting of an unarmed African-American man, but this isn’t a heedless Black Lives Matter screed. Amandla Stenberg plays Starr, a smart kid from the bad part of town who attends an upscale, predominantly white high school on a scholarship. She narrates about traversing these two worlds, show us how she speaks and behaves around her white friends, including boyfriend Chris (K.J. Apa), and her black family and friends.

One day she meets up with an old childhood friend she’s sweet on, and he winds up getting shot and killed by a police officer during a traffic stop. For a while no one in either her white or black communities know she’s a witness, and Starr struggles to find a middle way that will protect those she cares about.

The terrific supporting cast includes Russell Hornsby as her dad, who has a powerful scene where he gives “The Speech” about how black teens should behave around law enforcement; Regina Hall as her mother; Common as her uncle, who’s also a member of the LAPD himself; and Sabrina Carter as a white friend who turns out to be not as woke as Starr thought.

Directed by George Tillman Jr. from a screenplay by Audrey Wells, based on the book by Angie Thomas, “The Hate U Give” offers no easier answers but many nagging -- and important -- questions.

Bonus features are quite good, cemented by a feature-length audio commentary track by Tillman, Stenberg, Hornsby and editor Craig Hayes. Such commentaries are always better when they include cast and crew.