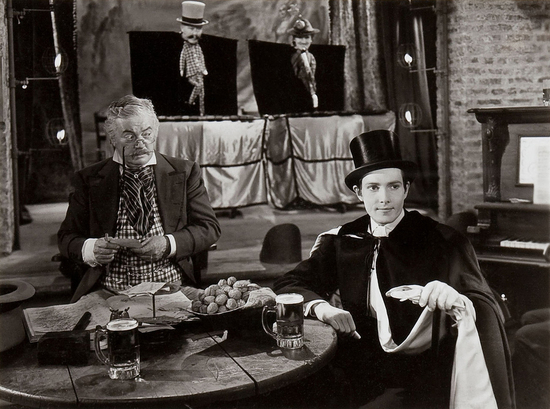 Most people know the parable of Dorian Gray without actually being aware of the story. I admit I wasn't.

Oscar Wilde's only novel has a great premise: a promising young man has his portrait painted, and wishes for eternal youth by having the passing of time reflected upon his artistic reflection rather than his actual visage. (A mysterious statue of a cat included in the painting is supposed to be the source of the charm.) As the years go by and people marvel at his unchanged appearance, Dorian hides the painting so no one will discover his secret.

But rather than being about just looking young, the real essence of the tale hinges upon Dorian's very soul. He engages in all sorts of terrible behavior, including drugs and debauchery, eventually leading up to murder. The portrait winds up looking like something hanging on the walls of Disney's Haunted Mansion -- a wild, leprous old man with lunatic eyes and blood on his hands.

Adapted by journeyman writer/director Albert Lewin, "The Picture of Dorian Gray" is a sort of Gothic horror melded with a cautionary note. It's a gorgeous-looking picture with terrific costumes and sets, earning an Oscar nomination for art direction and a win for Harry Stradling's cinematography, which is black-and-white except for the shots of the portraits, which are rendered in vivid Technicolor.

Hurd Hatfield portrays Dorian in his first starring role, which would end up defining his career. He deliberately plays the role with a nearly placid face, his powerful emotions being etched upon the painting rather than his face. Angela Lansbury also makes a bow in just her third screen credit, playing Dorian's doomed lady love, songstress Sybil Vane.

George Sanders got top billing as Lord Henry Wotton, a detestable nobleman who lives only for pleasure and to toy with others. (Think John Malkovich's character in "Dangerous Liaisons.") It is he who first plants the idea of an unchanging portrait in Dorian's mind, as well as serving as the film's narrator.

Dorian is a minor nobleman of about age 20. Blessed with wealth, independence and extraordinary good looks, he would seem to be set up for a happy life. When Wotton stumbles upon him, Dorian is being painted by their mutual friend, the good-hearted Basil Hallward (Lowell Gilmore). His young niece, Gladys, playfully adds her own "G" to Basil's signature upon the painting.

Years later she will grow into a beautiful young woman (played by Donna Reed) who is entirely ensorceled by Dorian and wants to marry him. He puts her off repeatedly, although eventually comes to see wedding her as his only chance to redeem himself.

His first love is Sybil, a singer in a low-rent carny show on London's seedier side. Given a front-row seat by the opportunistic emcee, Dorian becomes entranced by her rendition of "Little Yellow Bird," a lovely ditty about a free sparrow refusing a chance to enjoy love with a beautiful songbird if it means joining him in his golden cage. The song was written specifically for the film.

Lansbury is a wan, authentic presence, earning her own Academy Award nomination.

Dorian returns night after night, earning the enmity of Sybil's brother (Richard Fraser). But he proves his honorable intentions by proposing marriage, which shocks Wotton, Hallward and his other high-society connections. Wotton offers a test: insist that she stay the night with him and, if Sybil refuses, she is worthy of his name. At first she makes to go, and Dorian breaks a rare smile; but she returns, (presumably) they sleep together and he then dumps her.

She takes her own life, and this is when Dorian first notices a change in the portrait -- a bit of a cruel curve to the mouth. He pledges himself entirely to Wotton's ethos of self-indulgence, and the years fly by.

It being a 1945 film based on a book that was quite controversial in the 1890s, the movie is predictably circumspect about the nature of Dorian's debauchery. It shows him frequenting a lonely tavern on the wrong side of town, taking a sip of cherry while he wants for deformed servant to lead him to an unseen room upstairs. A mix of opium and sodomy, we presume.

The last part of the film is a bit messy plot-wise, introducing characters rather late in the game we're supposed to care about. One is Allen Campbell (Douglas Walton), an old school chum of Dorian's who has become a chemist. Dorian blackmails him to do his bidding with some embarrassing piece of information, but since we've just met the guy and the film offers no details on Campbell's past transgressions, it's heard to feel the weight of his guilt, or his later (off-screen) suicide.

Still, "The Picture of Dorian Gray" -- I always want to call it "Portrait" -- is a reasonably decent adaptation of a classic story. Even if it's one most people know only superficially.