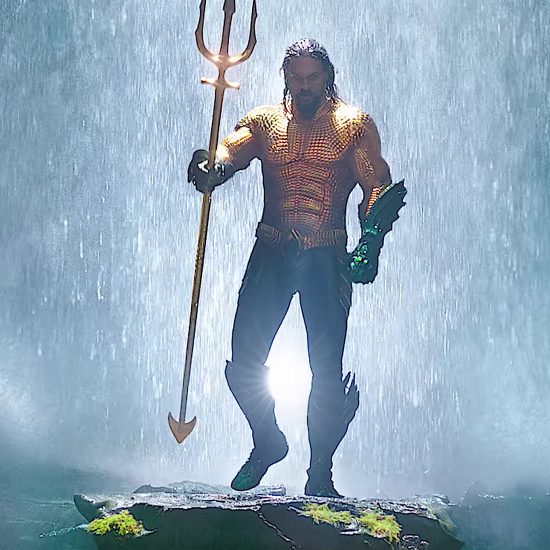 There are trashy movies and there are garbage movies. The former are decent flicks that engage in various tawdry indulgences and lowered ambitions; the latter have surrendered to them completely.

As the late, great Pauline Kael said, there is trash and then there is glorious trash. And while “Aquaman” may not exactly be glorious, it is an entertaining film that revels in its own trashiness.

Yes, Jason Momoa still can’t act his way out of a bag. But if any actor today deserves to have the “Seinfeld” term of “mimbo” bestowed upon him, it’s Momoa. He’s easy on the eyes, if your thing is beefy-but-not-overly-‘roided Polynesian dudes with long dark ringlets.

He doesn’t exactly look like the sort of guy who swims with the fishes and talks to them too, but he’s a charismatic, swarthy presence.

I’ll pause here to note that once again Hollywood has managed to take a blond superhero and turn him brunette. Captain America, the Human Torch, the Flash -- it’s practically an entire super-team’s worth of color changers. Even Thor was revealed to have brown roots when his ‘do got buzzed in his last solo flick. Aquaman at least has a little sun-dappling around the edges.

Anyway, the premise is that Arthur is the long-lost son of the queen of Atlantis (Nicole Kidman), who fell in love with a land dweller (Temuera Morrison) and grew up estranged from his people. He still has the powers of a high-born Atlantean, including super-strength, durability and swimming crazy fast, plus the additional trick of communicating with sea life.

Worlds collide when his brother, King Orm (Patrick Wilson), declares war on the surface world -- mostly as an excuse to unite the tribes of Atlantis and have himself declared the supreme Ocean Master.

Aided by wise sage Vulko (Willem Dafoe) and plucky princess Mera (Amber Heard), Arthur goes on a quest to recover the lost trident of his forbears, depose his wayward sibling and bring about peace. Besides Orm the heavy duties are shared by Black Manta (Yahya Abdul-Mateen II), a modern-day pirate who bears a special grudge against Aquaman.

The realm of Atlantis is represented in Day-Glo colors and trippy mood music, as director James Wan and script men Will Beall and David Leslie Johnson-McGoldrick (got enough names, dude?) milk the comedy and science fiction angles.

It’s like “Flash Gordon” meets the briny deep. You may find yourself sniggering at this trashy gen, but doubtless having a good time while doing it.

Bonus features are pretty nice. They include breakdowns of key scenes and the following featurettes: “Going Deep Into the World of Aquaman,” Becoming Aquaman,” “James Wan: World Builder,” “Aqua Tech,” “Atlantis Warfare,” “The Dark Depths of Black Manta,” “Heroines of Atlantis,” “Villainous Training,” “Kingdoms of the Seven Seas,” “Creating Undersea Creatures” and “A Match Made in Atlantis.”