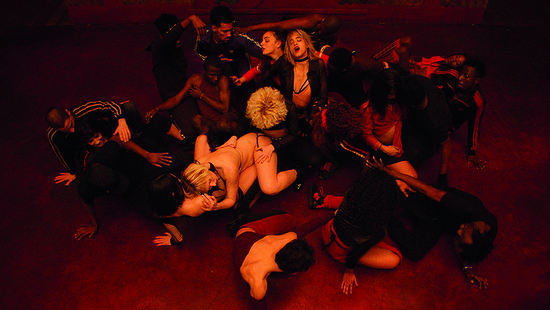 A psychotropic hothouse horror flick boasting artsy ambitions and filled with taut bodies getting squidgy with each other, “Climax” is a purely cinematic experience, if not an especially enjoyable one.

Strike that -- I don’t think filmmaker Gaspar Noé (“Irreversible”) makes movies with enjoyment in mind, so that’s not a fair yardstick to judge them by. I’ll put it this way: I think “Climax” largely accomplishes what it sets out to do, but I doubt very many people want to see a film of these intentions.

It's about two dozen or so young French dancers who are ensconced in a remote, snowed-in building for three days so they can rehearse. They’ve been brought together by a famous choreographer (never named or shown) who asks them all sorts of probing, uncomfortable questions in the audition interviews that act as the opening.

Clearly, they’re being set up for mischief.

Set in the 1990s, the story is supposedly based on a true story, though Noé’s screen titles are notoriously unreliable. “Climax” starts with the traditional end credits at the beginning, and then the opening credits happen halfway through -- though they list some people who are clearly not in the cast.

And then there are his “chapter” introductions. The first reads, “Birth is a unique opportunity.” What follows is an intensive, intricately choreographed dance ritual of astonishing athleticism and grace. Shot in a single long take with a Steadicam roaming all around, it’s a technically magnificent sequence that celebrates youthful suppleness and vigor.

(I could practically hear my knees creaking just watching it.)

Then there is the second chapter, “Life is a collective impossibility,” in which the dancers have a party celebrating the end of their work. They dance some more, gossip, talk about who they’ve slept with or are planning to sleep with, and so on. But someone has apparently spiked the sangria, leading to increasingly disjointed behavior.

It’s a little fun and flirty at first, as we expect to see some bed-hopping and other lascivious spectacle. (Noé  is, after all, the man behind the “Love,” with its bold, unsimulated depictions of sexuality.) But things quickly sour. The woman overseeing the troupe locks her little boy in a utility closet and then loses the key, the men start to fight each other and the women experience crescendoing bouts of mania.

Then comes the last section, “Death is an extraordinary experience,” and… well, you can probably figure it out. The camera starts twisting around like a seething serpent, flipping sideways and upside down until we’re often not even sure what we’re looking at.

Don’t expect to get to know any of the dancers as bona fide characters beyond a few superficial traits. David (Romain Guillermic) is the lothario of the group, always in conquest mode. Selva (Sofia Boutella) is the alpha female, setting the pace by dint of sheer verve. Mamadou Bathily is Dom, the outsized dancer -- “a woman-and-a-half in every direction,” as Thomas Harris would’ve said -- who tries to intimidate others.

Interestingly, the group is roughly halfway split between Europeans and Africans, though there don’t appear to be clear demarcations of cliques between the two.

In the end, I’m not really sure who “Climax” is made for. Mostly, I think Noé made it for himself, along with his small but ardent wave of devotees. It plays like a middle-aged fantasia about what it’s like to be young and beautiful and carefree, and how that must be resented and punished.

Usually in a horror movie it’s a madman with a knife meting out the destruction, but here the youngsters themselves share their own punishment, everyone taking a turn as victim and victimizer. I appreciated its shabby beauty, but ultimately it’s nothing more than a bad acid trip.