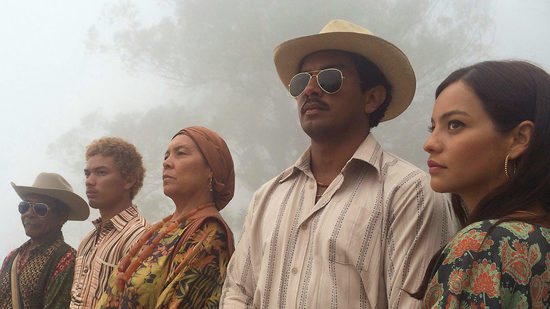 Imagine the "Godfather" films, but set in Colombia during the 1960s and '70s as a clan of people bound by culture and tradition try to maintain them in the face of burgeoning wealth resulting from criminal ventures. That is "Birds of Passage," a film of majestic sweep and squalid human failings.

It is the story of Rapayet (José Acosta), a wayward member of the Wayuu tribe native to parts of Colombia and Venezuela, although his tale is more the sun around which other characters orbit rather than the center of attention.

The Wayuu have been there before the Spaniards, the white man or anyone else. Their community is proud but insular, regarding all others as alijuana -- outsiders who are lesser. This even includes Rapayet's friend, Moisés (Jhon Narváez), a black man who regards him as a brother. If Moisés is boisterous and unpredictable, Rapayet is retiring and methodical.

As the story opens a young woman, Zaida (Natalia Reyes), from one of the more prominent families is coming of age. It's an elaborate celebration that brings many people together, preceded by an entire year of ritual isolation where she weaves a complex tapestry to prove she is a full-fledged woman. Wearing a colorful dress, she dances with a young boy in a teasing game. Then Rapayet claims his own dance -- and his intentions to marry her.

Alas, the family is demanding an exorbitant dowry. This is the idea of Úrsula (Carmiña Martínez), the strict matriarch of her clan. She is the keeper of a sacred talisman and believes that falling from the Wayuu way means utter damnation.

Úrsula does not like Rapayet, though she has some regard for his uncle, Peregrino (Jose Vicente Cotes), a "word messenger" who is trusted to carry important communications between the families.

To get the dowry, Rapayet hatches a scheme to sell a large quantity of marijuana to some American Peace Corps members, depicted as carefree hippies who just use the excuse of international service as a means to get high and party. They buy the weed from Rapayet's older cousin, Aníbal (Juan Bautista), an itinerant merchant of the stuff.

The first big score leads to increasingly bigger ones, and soon enough Rapayet has become the head of major narcotics operation. (Interestingly, they only ever deal in marijuana, not the harder and more lucrative cocaine that thrived in the same region.) He and Zaida have children, and Úrsula operates as sort of the sneering majordomo of the family.

Eschewing the simple wood-and-stone huts of their people, they build a stark white castle in the middle of nowhere -- a symbol of their wealth and, to other Wayuu, their pride.

Moisés proves to be an unreliable partner, spending freely and using his influence with the police and local politicians to make a big name for himself. This leads to conflict with Aníbal, and Rapayet finds himself pressured by his people to choose a side. He attempts a third way, which leads to his utter downfall.

(I'm not giving anything away -- a framing sequence uses an old man's singsong lament to preface that this is the tale of a man's rise and fall.)

Further complicating things is Leonidas (Greider Meza), surely the Sonny Corleone of this story -- a hot-tempered force of nature whose pure verve would be admirable if he didn't keep letting it get him into deeper and deeper trouble. He is Úrsula's son, and ostensibly the head of her portion of the family. No doubt she would prefer to see him replace Rapayet.

Cristina Gallego and Ciro Guerra directed, from their own story turned into a screenplay by Maria Camila Arias and Jacques Toulemonde Vidal. Despite the realistic edge to much of the tale, "Birds" has a lyrical, almost mystical feel. Zaida is the seer of the family, visited by dreams that portend how their ancestors feel about their ambitions and actions.

"Dreams prove the existence of the soul," one character observes. By the end Zaida confesses that she hasn't had any such dreams in years.

This is a grand, haunting tale of tradition and hubris, and how clinging too fiercely to our desires only ensures they will eventually slip our grasp.