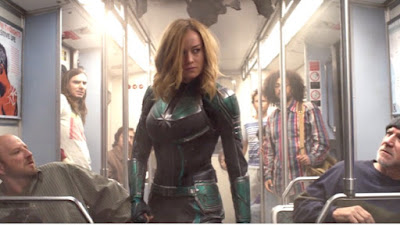 “I don’t have anything to prove to you.”


So sayeth Marvel’s newest(ish) addition to the MCU, Captain Marvel aka a Carol Danvers aka “Vers.” She’s a human who’s been serving the Kree, a mighty alien do-gooder empire, for as long as she can remember -- which isn’t very far back. But after her adventures return her to Earth some pesky memories start reviving, throwing her entire self-conception into doubt.

This is one hero’s journey that mostly takes place between her ears.

If “Black Panther” was the (stupendously overhyped and overrated) answer to the cultural collectivism craving an African-American superhero -- “First ever!,” they squeed, forgetting Blade did it 20 years earlier -- then “Captain Marvel” is the more finely attuned answer for the gender-balance scales.

There’s definitely a grrl-power theme to this production, directed by Anna Boden and Ryan Fleck, who also wrote the screenplay with Geneva Robertson-Dworet. But it’s not especially in our face. More, it’s little moments where our interplanetary badass has a smile asked of her by some surly biker dude, or an older male mentor demands that she prove herself -- on terms he sets out himself, of course.

It’s an entertaining, invigorating tale introducing us to a figure who’s been described in comic book lore as possibly the single most powerful hero there is. Brie Larsen is a wonder as Carol, playing the role with a mix of confidence, self-questioning and wry humor. Her character’s default mode is to act a little remote, letting people prove themselves to her before she warms up.

Chief among these is Nick Fury (Samuel L. Jackson), the S.H.I.E.L.D. boss who first had the idea of putting together a team of supers. The story is set in 1995, nearly a quarter-century earlier, but the 70-year-old Jackson pulls it off without the CGI help Robert Downey Jr. used, just a hairpiece and a little helpful makeup.

When Veers crash-lands into a Blockbuster Video store -- Google it, youngsters -- Fury is sent out to investigate. He briefly tries to put the cuffs on her, which doesn’t work so well for a woman capable of firing photonic blasts from her fists. Fury ends up following her around, leaning in to the role of wise-cracking sidekick.

The movie’s first half does take its own little time sorting out the story threads. I got a bit impatient around the one-hour mark. And you’d have to be pretty blind not to see the big turn the tale’s going to take. But the last act is an action- and emotion-packed humdinger well worth the long-winded windup.

Jude Law plays Yon -Rogg, Ver’s commander and best Kree friend; Lashana Lynch is Maria, a steadfast human pal from back in her days as an Air Force test pilot; Annette Bening plays an Earthling scientist who curiously also takes the form of the Supreme Intelligence, the AI ruler of the Kree.

The bad guys are the Skrulls, green-skinned shapeshifters who’ve been attacking the Kree outer systems. Their leader is Talos (Ben Mendelsohn), who at one point captures Vers and sifts through her fractured memories for clues to his nefarious plans.

But if there’s a string running through “Captain Marvel,” it’s that it’s up to each of us to define ourselves rather than blindly queue up to the line others have drawn. Vers/Carol spends much of the movie wondering who she is, even as so many others seek to instruct her on the matter.

And, thank goodness, here’s a superhero movie that feels no impulse to inject a totally unnecessary romance into the mix. She is Captain Marvel, and that’s enough.