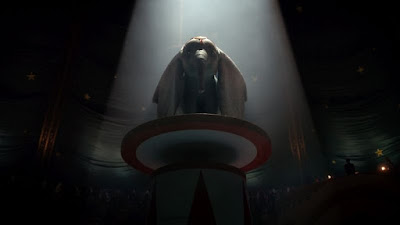 There’s nary a sprinkle of faerie dust in “Dumbo,” the new take on a Disney icon from director Tim Burton that never takes flight. Instead of a gentle fable about circus animals helping each other, it’s a standard-issue action spectacle complete with adorable kids, a missing parent and a cackling villain.

The new “Dumbo” is so human-heavy, the CGI elephant is relegated to being a sideshow.

Look, I’ve been agnostic about Disney’s let’s-take-our-animated-classics-and-turn-them-into-live-action-flicks obsession. I thought “Cinderella” perfectly wonderful. “Maleficent” was uneven but inspired. And this trend isn’t going away. Heck, we’ve got “Aladdin” and “The Lion King” on the docket just in the next few months.

But this adaptation is a total flop. It’s flat, colorless and almost hypnotically unemotional. The screenplay by Ehren Kruger feels like it was written by someone who only saw the 1941 original underwater with the sound turned off.

Danny DeVito gets in a few early kicks as Max Medici, the chatterbox owner of the Medici Bros. Circus where Dumbo is born. (Like most things with Max, the “brother” is flimflam; he’s the sole Medici.) After he agrees to sell out to upscale conman V. A. Vandevere, owner of the extravagant Dream Land amusement park, Max just stands around with hardly anything to say.

Vandevere (Michael Keaton) manages to be both humorless and un-scary. He wears a swoopy silver toupee and has an announcer preceding him everywhere he goes so folks know he’s important. He keeps a French former aerialist, Collette aka “Queen of the Heavens” (Eva Green), on his arm just because he wants people to think he’s sleeping with a knockout rather than actually sleeping with her.

Colin Farrell, an Irishman doing a woeful Okie accent, plays Holt Farrier, former center ring king as the head cowboy act of the Stallion Stars, recently returned from the war. Alas, he lost an arm to battle overseas and his wife to influenza while he was away. His two moppets, Milly (Nico Parker) and Joe (Finley Hobbins), act as de facto friends and guardians of Dumbo.

The story, set in 1919, starts in Sarasota, Fla., and turns through small towns to Joplin, Mo., where Dumbo is born to a mother elephant named Jumbo that Max has just bought at discount. When baby Jumbo pops out with those big floppy ears, Max immediately wires to demand a refund for damaged goods.

The kids notice that the baby seems to hover for a second or two whenever he sneezes after inhaling a feather, though of course none of the grown-ups believe them. Eventually, though, he puts on the act in front of a crowd and soon dollar signs are springing in front of everyone’s eyes. Vandavere shows up almost immediately and offers Max a partnership -- the kind where he calls all the shots.

I’m truly not sure why this movie exists. There’s no overtaxed stork delivering Dumbo; Timothy Q. Mouse is glimpsed briefly but doesn’t speak and plays no role; the pink elephants on parade are mere soap bubbles; and forget about a murder of crows teaching Dumbo to fly. It’s pure elephant ear power.

Speaking of those ears: the CGI is good enough that it seems plausible Dumbo could get airborne by flapping them hard enough. But he’s just a little baby; what happens when he grows up and weighs five tons? Even hummingbird speed wouldn’t be enough to get higher than a peanut’s breadth off the ground.

Same goes for the movie, earthbound and ugh-y.