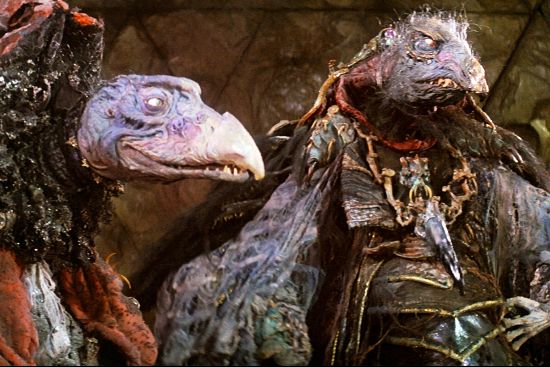 "The Dark Crystal" wasn't exactly a flop when it came out in 1982, earning a decent amount at the box office and mixed-to-positive reviews. Jim Henson was still known as "the Muppet guy," and while audiences and critics praised the artistry of  the film, the reaction was overall more respectful than enthusiastic.

Mostly it was seen as a weirdo fantasy kiddie flick from a guy who had struck it rich in puppets and was now flying too close to the sun with his ambitions.

Plenty of Gen X kids adored it though, including me, and it's developed into enough of a cult classic that Netflix has created a new series that's a prequel of the same world.

To prepare for the new show I decided to rewatch the original, which I probably haven't seen in at least 15 years. I managed to convince my boys, ages 6 and 8, to join me and although they took a little while getting into it, they thoroughly enjoyed it.

Seeing it now with adult eyes, I can grasp its limitations as well as its innate, undeniable magic.

The conceit to do an entire live-action movie with puppets isn't a good one. Despite the amazing creature designs and manipulation by Jim Henson and his fellow puppeteers, the characters are still very stiff and lacking in facial expression. The eyes are pretty decent, and even manage to have a wet sheen that reflects in the camera lights, just as a person's would.

The cheeks and brows are pretty stuck, however, and the gelfling characters still retain some of the fuzzy skin look of the Muppets, making them seem like they were made out of curtains. As for the hands and arms, although you don't see the puppeteer's sticks -- most of the manipulation was done from inside the costumes -- their slow, deliberate movements bespeak of something that is controlled from without rather than within.

There was also some use of animatronics, I'm guessing with the large Garthim marauders, which look like some combination of crab and beetle morphology. Reportedly the costumes were so heavy they had to be periodically hung from racks to let the puppeteer inside have a rest. Brian Froud did the concept art for most of the creatures in the movie.

The film was claimed to be the first live-action movie without any humans in it, though I spot some obvious cheats when the main character, the gelfling Jen, is shown in full-body from a distance running or jumping. It seems pretty clear to me they used a child or small adult for these long shots, as his movements are swift and unfettered.

The gelflings, Jen (voice by Stephen Garlick) and Kira (Lisa Maxwell), are the most uninteresting of the creature designs, basically resembling standard-issue elves or fairies. They have pale yellowish skin, slim builds, delicate features and long upright ears that sprout out of manes of straight long hair.

The Mystics, or "natural wizards" who represent the forces of good, are hunched-over figures with four arms, tails and swirls of arcane symbols etched in their dun-colored flesh. They wear shapeless robes and walk veeeeeeerrrrryyyy slowly with staves. They sort of resemble hippie camels, and it appears that they sleep on elongated shelf-like beds with their long-necks craned out chin downward.

The Podlings are essentially featureless slaves, meant to disappear into the background of the story. Henson's crew literally designed them based on potatoes. They speak their own musical language, with smatterings of Russian, Polish, Serbo-Croatian and other Slavic languages mixed in.

By far the most compelling denizens of the film are the Skeksis, the evil counterparts to the Mystics who rule the land as cruel overlords. They appear to be vaguely reptilian, but with some bird-like features and fur. They wear elaborate robes, armor and jewelry, with each Skeksis varying quite a bit according to their role and personality.

For example, the two main Skeksis almost appear to be from different species. The gruff General (Michael Kilgarriff) is huge and wolf-like, while the fawning Chambelain (Barry Dennen) looks like a bipedal vulture. Others vary somewhere between upright alligators and rats.

Chamberlain speaks in a high, cloying wail and has a tendency to issue a keening whimper whenever he's not talking, annoying the General to no end. (My friends and I spent years imitating it.)

When the Emperor dies, the two face off in a duel to see who can place the best cut using swords on an obelisk of stone. The mighty General easily defeats the diminutive Chamberlain, stripping him of his raiments and banishing him into the wild.

Of course, you probably know already that the Mystics and Skeksis represent two halves of a greater power, so when one dies or is injured the same fate befalls their counterpart. Thus the dying of the evil emperor coincides with the passing of Jen's father/Master, the wisest of the Mystics, whose final words send him on a journey to heal the Dark Crystal and fulfill the prophecy.

From a quest standpoint, this has to be the simplest one ever conceived. It only has two steps: Jen must retrieve the Shard broken from the Crystal, and then put it back into place. He doesn't even have to hunt for the Shard, simply travel a day to see the oracle Aughra, who readily surrenders it to him.

Aughra (Billie Whitelaw) appears to be a unique creature, an astrologist who has created a massive orrery of their solar system spinning about the dome of her abode. She appears as a squat, vaguely toad-like witch who seems to have suffered a massive injury at some point, a large scar where her right eye used to be. She can also pull out the left one and use it to extend her vision.

Jen does have to use his pipes to discover which of Aughra's many crystal shards is the correct one, much in the same way the Mystics use their deep-throated humming to work their magic. Music seems to lie at the center of "good" magic in this world, with Kira singing to effectuate her power, which is to communicate with animals.

She also has wings, unlike Jen, which she can use to glide for short distances. Her dismissive response when he is astonished at this difference still draws a chuckle: "Of course not, you're a boy!"

"The Dark Crystal" was directed by Henson and Frank Oz from a screenplay by David Odell based on Henson's original story. He originally got the notion from some drawings of Lewis Carroll's writing depicting robed crocodiles.

Originally there were many more Skeksis and Mystics, but they have aged over a thousand years and are down to 10 as the story opens -- nine, after the Emperor and Master pass away. The Skeksis use the Dark Crystal in a ritual to capture the rays of the three suns to replenish themselves -- supplemented by drinking the liquid "living essence" of other creatures extracted in much the same way, which temporarily reverses the aging process.

The Skeksis do not appear to have any sort of innate power and are rather shriveled weaklings, apart from the General. Their rule seems to depend entirely on the ability to command the Garthim -- something the Chamberlain retains even after being banished -- and pseudo-science use of the Dark Crystal to stave off the decay of their wretched bodies.

Dying and decrepitude are odd themes for a children's story, not to mention the duality of good and evil. I can see why many people were puzzled or even disappointed by the film when it came out.

Still, strictly from an artistic standpoint "The Dark Crystal" broke a lot of ground. It was a very dark, imaginative and offbeat form of storytelling, particularly for one aimed mostly at children. Puppet movies didn't really take off afterward like Henson & Co. hoped, but the idea of heftier, gloomier tales as popular entertainment did live on.

I can't help but think the true inheritors of this movie are stop-motion animation gems like "The Nightmare Before Christmas" and "Coraline." The legacy of Jim Henson endures.