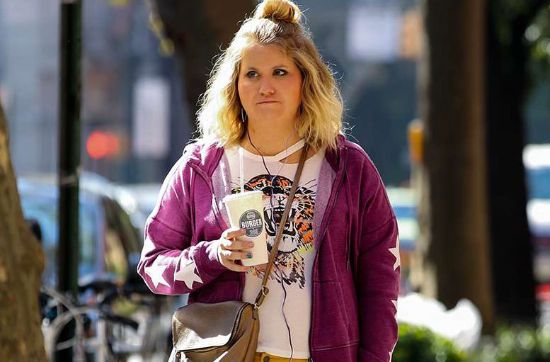 Brittany Forgler is 28 years old, 5-feet-6-inches tall and weighs 197 pounds. With a Body Mass Index of over 30, this makes her technically obese, though she is shocked and offended when her doctor uses that word.

I like it when movies deal in specificity. One of the things that drives me nuts is when film characters are maddeningly vague about important stuff. Like they'll say they're poor, but don't say how little they make.

"Brittany Runs a Marathon" doesn't get into its protagonist's finances, but it does deal in absolutes when it comes to the numbers on her scale.

She's played by Jillian Bell, a wonderful actress you've probably seen in supporting roles in a lot of popular movies. Usually she plays the heroine's wingwoman or the sardonic sister. Here she gets to shine in a funny but meaty leading role about a woman who decides to make a change in her body and her mind by taking up running.

This is not a movie about a fat person who got thin and it turned their life around. Rather, it's the story of a woman who has trouble letting people in, and eating and partying too much are just a symptom of her trying to fit in.

Brittany starts jogging, simply because it's the cheapest and easiest form of exercise there is. Plus, one of her neighbors, Catherine (Michaela Watkins), is a seasoned runner and it seems like the most obvious thing. Brittany and her roommate, Gretchen (Alice Lee), resent Catherine because she has a swanky penthouse in Manhattan and is just using their building in the outer boroughs as a photography studio.

But "Brittany," written and directed by Paul Downs Colaizzo, isn't content to leave people as their surface presentation would indicate. Everyone has layers and complexities, and Catherine is no exception. Running brings them together, though its just the beginning of a complicated relationship.

Brittany has one of those busy New York City lives that seems like a lot of fun on the outside but is crushingly lonely and depressing when they're not "turned on." She has a low-level job at a local theater, buys drinks for half the bar but has never had a meaningful relationship.

Brittany and Gretchen get along, but Gretchen is one of those "influencers" whose job seems to revolve around looking pretty and chronicling her awesome life. When Brittany starts to lose weight and get her act together, it sets off friction because it disrupts the power status they had both assumed for the relationship.

"You may keep the weight off but you will always be a fat girl. It's just who you are," Gretchen snaps.

Brittany takes a second job taking care of the houses and dogs of rich people when they're traveling, and encounters Jern (Utkarsh Ambudkar), a loser who takes the night shift but has actually turned it into a live-in gig. He's a typical movie man-child, in his 30s but still acting like a stupid teen, using the swanky abode to get hot dates.

They immediately clash, but according to the rules of the romantic comedy they must eventually fall for each other. Seth (Micah Stock), the good-natured gay man who becomes the running friend of Brittany and Catherine, even cheekily predicts this will happen.

Things go from there. The pounds slide off and Brittany starts to feel happy and confident, and makes plan to run in the next NYC Marathon. (Bell wears padding and makeup in the early going to make her seem heavier.) She begins to assert herself and nice things start to happen. Men who had previously ignored her pay attention and hold the subway door.

As I said, Colaizzo -- who wrote the movie based on a real-life friend -- refuses to deal in absolutes or simple answers. Without giving anything away, suffice it to say that Brittany's journey takes a few detours and backsteps.

This is a good and interesting movie. It straddles the genres of romance, comedy, drama and chick flick without worrying about fitting into any one slot. Bell is marvelous, and we find ourselves rooting for Brittany even when we know she's not always the nicest person or good at self-care.

The numbers on a scale can be useful, but they do not define us. What initially seems like a story about losing weight becomes something heftier and more human.

P.S.: Body Mass Index, or BMI, is pseudo-science horseshit, btw. It's a crude height-to-weight ratio that lumps in professional athletes with buffet-line kings. Did you know that America's "fat crisis" actually became a thing when the BMI threshold was suddenly changed in 1998, tossing 30 million "healthy" people into the "overweight" category? It doesn't even differentiate between men and women, or old and young. I could go on. I'll leave with my favorite anecdote about BMI: do you remember when Matthew McConaughey got grotesquely thin for "Dallas Buyers Club, resembling a fleshy, shambling scarecrow? According to BMI, he still fell in the "Normal" weight range.)

Posted by Christopher Lloyd at 2:40 PM