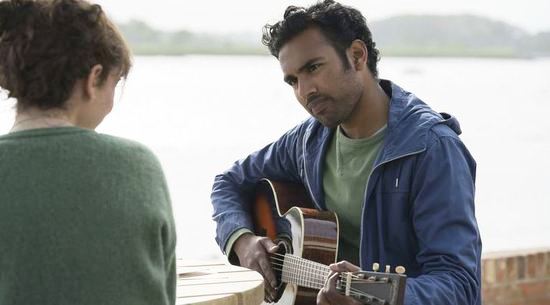 “Yesterday” is a feel-good romantic dramedy that telegraphs all its punches, but even though you know everything that’s going to happen, it’s still emotionally satisfying.

The set-up is that a struggling Indian-British musician gets bonked on the head in a traffic accident. When he wakes up, he’s astonished to learn that nobody in the world but him knows the music of the Beatles.

It’s as if the greatest (in some people’s opinion) rock band of all time had never existed, except Jack (Himiseh Patel) still has all those iconic songs at his fingertips. So he sets out to become the greatest overnight sensation in the history of popular music, passing off the tunes of George, Ringo, John and Paul as his very own.

Director Danny Boyle and screenwriter Richard Curtis don’t bother with the metaphysical causes of this event. This isn’t science fiction, it’s a comedic pluck at the heartstrings.

Lily James plays Ellie, Jack’s erstwhile manager/best friend/secret admirer. She’s been driving him around to penny-ante gigs and bucking up his spirits for years. Of course, we all know this is going to build toward a big reveal of suppressed emotions.

The story wearily treads through some of the staples of the romantic comedy genre -- misunderstandings based on overheard conversations, or building toward a big conversation that gets interrupted by a phone call or knock at the door.

Kate McKinnon, Joel Fry and Ed Sheeran round out the supporting cast, playing a mercenary music producer, feel-good buddy/roadie and himself, respectively.

“Yesterday” is a whipped sundae of a film -- not very substantial or nutritious, but engineered to deliver easy, sweet pleasures. That it does, along with a lot of great music.

Video extras are quite good. There’s an alternate opening and ending, a dozen deleted scenes and a gag reel.

Boyle and Curtis team up for a feature-length commentary track, and also have their own documentary featurette. There are similar shorts about McKinnon, Sheeran, a performance by Patel at Abbey Road Studios, and more.