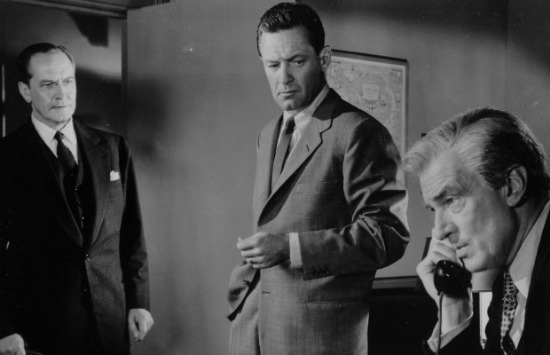 While a fairly typical Golden Age drama in a lot of ways, "Executive Suite" diverged from other Hollywood dramas of the day.

Most notably, it was set inside the top leadership of a national furniture company and focuses on a struggle for power when the enigmatic president suddenly drops dead. That's it. There is no spy intrigue, no murders, not very much sex (or the implication thereof, this still being 1954).

Hollywood has never liked business settings, then or now. Since few writers or directors came up in the business world, they struggle to find something interesting to tell a story about in a common office setting. Even when creative stories are set at work, they tend to focus on the personalities rather than the actual job, like the TV series "The Office."

Try to think of some modern films that are entirely set in the quotidian workplace, and you'll be hard pressed to name many, especially those that aren't "sexed up" with murdery-mystery elements. "Working Girl," "Glengarry Glen Ross," "9 to 5" and "Michael Clayton" are the only ones I can come up with off the top of my head.

Director Robert Wise also made the interesting choice not to use any musical score or soundtrack of any kind, which was very unusual for the day. The board room proceedings play out in tense silence, which I don't think would've been helped with a ladling of syrupy strings.

"Executive Suite" features the prototypical 'cavalcade of stars' that was popular in that era, particularly from MGM., which had a vast pool of talent to pull from. This includes William Holden, Barbara Stanwyck, Walter Pidgeon, Fredric March, June Allyson, Paul Douglas, Dean Jagger, Louis Calhern, Shelly Winters and Nina Foch.

In a lot of ways it reminds me of a forbear of "Modern Men," focusing on the men and women carousing the Big Apple corridors of power, often winding up in each other's laps or beds. (Or at least what I know of the show from pop culture, having never seen an episode.)

These great actesses are largely relegated to the role of the wife, the secretary, the jilted mistress, the girlfriend -- or some combination thereof.

Produced by John Houseman (who does not appear), written by Ernest Lehman from a script based on the book by Cameron Hawley, this is defintely a tale of a man's world where the womenfolk populate the fringes of the story.

The president, Avery Bullard, is never actually depicted in the film, other than his body being seen put into an ambulance from afar. The film actually opens with a first-person perspective of Bullard exiting the Wall Street headquarters of the Tredway Corporation, filling out a telegram calling for a board of directors meeting for that Friday evening at 6 o'clock, then keeling over dead from an apparent heart attack.

His wallet, which he'd just used to pay for the telegram, flies out of his hand into a street gutter, where it is pilfered for cash and the ID tossed into a trashcan. So it takes a few hours for the police to identify Bullard.

As it would happen, two people in the Tredway building saw the commotion and identified Bullard: George Caswell (Louis Calhern), a conniving playboy board member, and Julius Steigel (Edgar Stehli), an old hand who would seem to be a lawyer or similar advisor. This sets all sorts of higgledy-piggledy into motion.

The men had just been arguing about Bullard's failure to appoint one of his vice presidents as executive VP, thereby anointing an heir apparent. Julius had waved the need off, pointing out that Bullard was a hale 56 years of age, while he himself is almost 71.

Caswell responds to the death by immediately selling off of as much of his stock as possible, anticipating the price will crash when Bullard's death hits the news. But because of the snafu with the wallet, this happens after the stock market has closed, so on Monday he will either turn a handsome profit or be wiped out.

As the story plays on, we learn the identity of the other executives and the background of Tredway. It seems the company's founder died some years ago leaving it in a lurch, and Bullard was able to turn things around and make it very profitable. But in recent years they've gotten away from their hallmark of well-made furniture in favor of cheap stuff like the new K-H line, which is little more than the DIY pressboard so common today.

Don Walling (William Holden) is a hard-charging young designer who was brought in personally by Bullard five years ago to develop new styles and experiment with more efficient production methods. He's mostly a rolled-up-sleeves type hobnobbing with workers in the factory rather than authoring memos in "the tower," aka the NYC HQ. His wife, Mary (June Allyson), is supportive but assertive, insisting that it's time for him to move on from Tredway.

Frederick Alderson (Walter Pidgeon), the treasurer, would seem to be the obvious pick to succeed Bullard. He's been at the company forever, is appropriately grey-haired with a patrician mien, and yearns for a return to the company's glory days.

However, Alderson is outmaneuvered by Loren Shaw (Fredric March), the controller who sees everything in terms of dollars and cents. He gets to the office before anyone, handles the press, the official statement, even arranges the funeral so it will not interfere with Monday's day shift. Shaw also takes the liberty of releasing the company's stellar earnings report early to mitigate the hit to the stock price.

Of course, this has the effect of underming Caswell's little scheme. The two men hatch an arrangement to transfer some of the company's reserved stock to Caswell to cover his wager in return for his vote to make Shaw the next president.

It's a very subtle, internal performance from the great Fredrick March. He plays a man of quiet ambition who has been licking his chops for the top job for years, and obviously has done the legwork to make it happen. If there were an element of intrigue in this story, I'm sure it would be Shaw who had poisoned Bullard's martini or something.

Shaw's not a bad guy, or certainly he would not see himself as such. He's just a (then) new breed of corporate denizen who believes everything should be about maximizing shareholder dividends rather than thinking about and investing in the future.

After Shaw undercuts Alderson's self-confidence, he feels he's blown his own chance at taking over the corner suite, and withdraws his own candidacy. (This is ludicrous, of course; though surrendering after one minor defeat is probably a good indicator he doesn't possess the mettle for the job.)

Alderson and Walling flail around trying to find somebody else who would be less objectionable than Shaw, but the most obvious choice, manufacturing chief Jesse Grimm (Dean Jagger), had already determined to retire, tired of the company's decline in quality products. They try to tag Walter Dudley (Paul Douglas), the likeable sales VP, but Walling feels he'd do little to halt the company's wayward path.

What they don't know is Shaw has already secured Dudley's vote by subtly blackmailing him over his affair with his secretary, Eva (Shelley Winters). Meanwhile, Walling puts himself forward as an alternative. Alderson is initially hesitant given his age, and likely his own pride, but eventually comes around.

The other major player is Julia Tredway (Stanwyck), daughter of the company founder and owner of the largest share of company stock. It was also a well-known secret that she had carried on a 10-year affair with Bullard, who ultimately rejected her in favor of the company. She's easily manipulated by the men, particularly Shaw.

Stanwyck has one great scene where she's confronted by Walling, and she nearly throws herself off the skycraper balcony. It's not a big part, but Stanwyck makes the most of it.

Foch plays Erica Martin, the president's secretary and keeper of secrets. It's an interesting role, played very close to the vest as the loyal person who carries out orders. She's the one who makes the calls, arranges the meetings, tallies the votes. Shaw tries to press her for dirt on Bullard but is sharply rebuffed.

Foch is in the only peformer in the film to receive an Oscar nomination, which must have stung for all these male thespians wearing their three-piece suits and spouting urgent dialogue. The film also received nods for the cinematography (by George J. Folsey), costumes (Helen Rose) and art direction.

In general I love black-and-white pictures, though I do wish this one had been in color. All the handsome wood board rooms and costumes probably would've looked quite amazing in Technicolor.

An odd egg of a movie that still slides seamlessly into mainstream Hollywood fare of that era, "Executive Suite" is well-acted and undeniably entertaining. Even if business films have hardly ever been a going concern, this one is cinematically profitable.