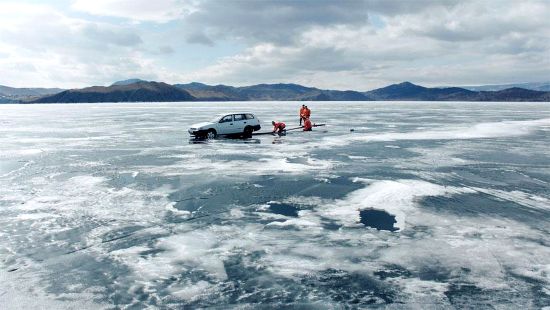 "Aquarela" can be a hard movie to watch, even though it's often mesmerizing. It's also quite difficult to review.

This documentary from director Viktor Kossakovsky is about water -- specifically, ocean water that starts out as glacier ice, splits off into hulking ice floes, becomes waves upon the open sea, and eventually winds up flooding the inland abode of humans who are largely indifferent to its source, or its power.

Obviously, there's an inherent environment message at the heart of the project. Without it ever being overtly stated -- indeed, after the first few minutes the film hardly has any words at all -- the documentary is a cautionary tale of global warming. As the ice at the poles melts, it leads to indelible effects on the rest of the globe.

Kossakovsky winds the human story alongside that of water. It opens with a sequence set in the northernmost reaches of Russia as spring approaches. People are used to driving their cars across the frozen river, but the melting is starting earlier and earlier, so the vehicles wind up plunging through the ice. We watch, fascinated, as crews work to pull the cars out.

The people seem jaded to this experience, with two men calmly explaining they swam out the hatchback door. Mostly they're concerned with the damage to the front bumper and if it can be fixed. Later, we witness a much more dire circumstance in real time.

Footage also travels to Scotland, Greenland, Venezuela, Portugal, the United States, Mexico to continue the story of water, as well as the middle of the Atlantic Ocean.

The star of the movie is the photography, which has to be seen to be believed. (Kossakovsky and Ben Bernhard serve as cinematographers.) We see the water in every form, from ice to liquid to vapor and various halfway states in between. We watch as massive glaciers melt and split apart into a crumbling wasteland of mush.

Then, when large hunks of the ice float away, the cameras dive underneath them as the journey, seemingly living things, far and away.

Sometimes the water is very blue; other times it seems to exist in only shades of black. Pinks, oranges, grays and other hues pulse across the screen.

Often, we're not sure at first what we're looking at. What seems like a ribbon of ebony rock is actually the waves of the ocean, seen roiling at night from high above.

The music that accompanies this trip (by Eicca Toppinen) is very non-traditional, ranging from metallic atonal clanks to what can only be described as heavy metal rock. It revs up and down as gigantic ice floes the size of cities bob up and down in the ocean.

Yes, the footage can get repetitive at times. At 89 minutes the film lingers too long on certain segments. I kept thinking the sweet spot for "Aquarela" would be as a 68-minute IMAX movie. Certainly, the visual majesty is there.

This is not the sort of documentary that makes you think, but simply presents astonishing images that take your breath away. The thinking comes after.