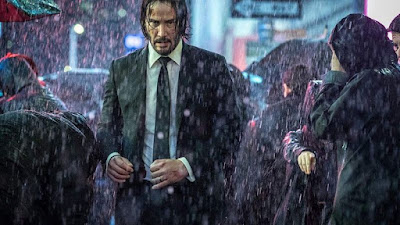 John Wick is showing his age, as well as accumulated wear and tear, in his third outing. The legendary assassin played by Keanu Reeves, who retired before being pulled back into his own game, has been declared an enemy of the underground and is on the lam in “John Wick: Chapter 3 -- Parabellum.”

That last part means “prepare for war,” so you know there’s going to be plenty of bloody mayhem. Fans will certainly not be disappointed in the body count or spectacular action set pieces, where Wick takes on fellow killers by gun, hand, knives, sword, motorcycle and a few other methods of death.

We meet more members of the secret international society of assassins -- some helpful, some lethal. These include Halle Berry as Sofia, who runs the show in Casablanca; Laurence Fishburne as the Bowery King, who’s in charge of the army of invisible homeless; Anjelica Huston as a ballet director with some dark ties to Wick’s past; and the “Adjuticator” sent from the society leadership to clean things up.

My favorite new add is Mark Dacascos as Zero, who runs a sushi bar by day and leads a cadre of ninjas at night. He’s openly worshipful of Wick, so it’s like he’s fighting his own fanboy. We get the sense Zero but equally pleased with being the man who finally kills Wick, or joins his list of the vanquished.

Reeves is no spring chicken, and with Wick’s growing list of injuries -- he’s been shot, stabbed and pummeled over the course of the few days during which the entire film franchise has taken place -- he moves in a lurching, graceless manner.

Personally I preferred the lean, mean, stripped-down ethos of the first two films, directed by stunt coordinator-turned director Chad Stahelski. It felt like the crew had been left to make their own movie after the above-the-title folks had wandered off for a few days.

With a reported budget of $70 million, “Chapter 3” is definitely edging more toward James Bond than grindhouse. There’s even some noticeable cheating through the use of CG imagery or tricky editing, something I appreciated the earlier films for eschewing.

Still, it’d be hard to deny that Wick is still a blast, a little bit of the ol’ ultra-violence in mainstream form.

Bonus features are pretty decent, though you’ll pay more to get the best stuff. The DVD has just theatrical trailers and two making-of featurettes. Spring for the Blu-ray edition, and you add six more featurettes.