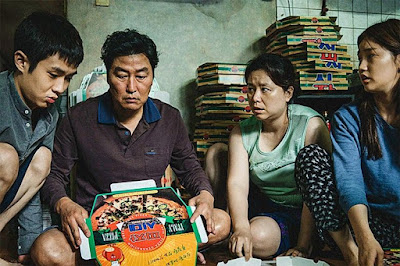 It was a historic night at the Oscars, though not a particularly great one if you think the best films should prevail. C'est la vie.

"Parasite" became the first foreign-language film to win Best Picture, and also the first Cannes Palme d'Or winner to also take the Academy Award in 65 years, the last one being "Marty."

It's pretty rare for my favorite movie to win Best Picture, so I'm used to disappointment. I liked "Parasite" but it didn't make my top 10 or even my list of also-rans. I found it intellectually interesting but not very emotionally engaging. None of the characters really stood out to me.

Oddly, the maid is the only person I found myself somewhat identifying with. It seemed like it borrowed too obviously from other movies, particularly "Shoplifters" and Kurosawa's "High and Low," and the Tarantino-esque bloodletting ending pretty well lost me.


Still, in an overall weak year for films there wasn't really a strong frontrunner to oppose it. Even though "1917" won most of the key preliminary awards, including the usually predictive Director's Guild prize, I think the groundswell of support for picking a foreign film swept people up.

I hear a lot of people calling for this to be the start of a trend, with more foreign films vying in categories beyond the International Feature. "Cinema is the global language," yada yada.

Honestly, I hope not. Aside from truly exceptional films from abroad, the Academy Awards have always explicitly been part and parcel of the Hollywood industry.

As I've said before, whenever people complain about foreign films not winning more Oscars, I ask them to remind of all the American films that won a slew of prizes at the Korean/Spanish/Swedish/whatever film awards. There's nothing wrong with being an institution primarily aimed at celebrating work from a particular country or language.

Nobody complains when the BAFTAs always go to British movies.

(Notably, Cannes and many other film festivals that give out coveted awards are explicitly international by design.)

I've noticed more and more foreign films creeping into the short film, documentary and animated categories in recent years, to the point of dominating them. Only one out of five documentary features and live action shorts were set in America, and as it turned out they both won.

I guess nativism is fine for those "smaller" categories.

I think "1917" was hurt by not having any acting nominations. Actors make up the largest bloc of Academy voters, and they love movies with meaty parts. Casting a couple of unknowns who were as much stuntmen as thespians undoubtedly diminished its chances, even with a few name actors in bit parts.


So it fell to "Once Upon a Time... in Hollywood" to take up the slack, and I think in the end people recognized it as a wonderful-looking movie with some nice performances and a haphazard train wreck of a script. But I lost track of how many times Quentin Tarantino drew praise from the stage, even by people who weren't in his movie.

It's the oldest story in the world: young, rebellious upstart becomes part of the institution. Strange the way he's beloved in the #MeToo age, given the fetishistic way he divides up women's bodies into subjects for his leering gaze. In an age focused on giving women their voices, here's a guy who literally resurrected a starlet so he could render her wordless.

Bong Joon Ho paid homage to both Tarantino and Scorsese in his acceptance speech, and then seemed to realize he couldn't leave out the other two guys, so he slipped in some half-hearted praise.

It was definitely a spread-the-love around night, with the four for "Parasite" leading the parade. All four favorites in the acting categories won, which is a little boring. Usually when you go into the ceremony with four locks, it means there's going to be one upset.

My money was on Renee Zellweger, who ended up winning for "Judy," a perfectly fine but not great movie. That's actually a not uncommon occurrence for someone to win Best Actor or Actress without their film receiving any other nominations.

I honestly don't pay much attention to the speeches -- that's when I'm tweeting out my responses to the award -- though I couldn't help zero on Joaquin Phoenix's utterly kooky and cryptic callout for... not stealing baby cows' milk, or something. It's not too often you hear an Oscar speech that talks about artificial insemination.

Look, dude, eat what you want and I'll do the same.

The utterly placid "Toy Story 4" won animated feature, thus securing this as the Disney/Pixar award even when they produce substandard fare. Thus it goes that the "How to Train Your Dragon" saga comes to a close with zero Oscar wins, losing to a Mouse House movie every time. How depressing.

In terms of predictions scorecard, I was right on 20 out of 24, which is pretty good for me. I think my best ever was 21. I missed on musical score, best picture, best director and sound editing. I actually got all the short film categories right, which is usually where I run astray.

So we pull the shroud over 2019, a slightly subpar movie year imho. Many of my favorites didn't even rate nominations, which isn't all that unusual. In the scramble to find foreign films to honor, a lot of terrific homegrown ones like "Harriet," "Late Night" and "The Last Black Man in San Francisco" were overlooked.

Posted by Christopher Lloyd at 10:13 AM