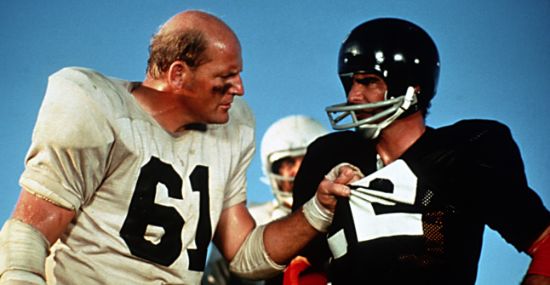 "The Longest Yard" became an iconic sports comedy without being especially funny or having particularly good gridiron action. It was remade several times around the globe, including a 2005 version starring Adam Sandler in which Burt Reynolds switched from the lead in the original to the grizzled old coach.

I haven't seen the newer one, and based on my viewing of the 1974 version and my general aversion to Adam Sandler comedies, I don't plan to.

It's a classic underdog story, in this case a bunch of inmates at an unnamed Florida prison who are enlisted to take on their guards, who play on a semi-pro team that's the pride and joy of the egotistical warden. They're supposed to just give the guards a tune-up for their upcoming season, but of course they have to go all out for the win.

Their leader is Paul Crewe (Reynolds), a former NFL quarterback who had his career cut short for shaving points. He hasn't touched a ball in a few years but is blackmailed by the warden into putting together a team.

The film, directed by Robert Aldrich ("The Dirty Dozen") from an original script by Tracy Keenan Wynn, is tonally weird. It never gets overly dark but there's some fairly abusive behavior by the guards and one horrific scene where an inmate is burned to death. But then we're supposed to laugh a few minutes later at all the male-bonding hijinks.

It pretty well ignores the darker aspects of prison life like gangs, drugs and rape. The biggest inter-prisoner conflict is racial as the black inmates segregate themselves from the whites, refusing to join Crewe's team at first. There are no Latinos to be seen and one token American Indian named, tellingly, as "The Indian."

As a protagonist Crewe seems more like an amalgam of traits than a coherent, well-defined character. I think the film would've been improved by giving us more of a glimpse of his life prior to the start of the story, where he's the boy toy of a wealthy woman, Melissa (Anitra Ford). He obviously loathes himself and the low state he's fallen to, essentially a hustler who sells his body for status and security.

I would've loved to have seen something about how he was doing exactly the same thing as a football player, but socioeconomic analysis is not in the mix.

In the opening scene Crewe lies sleeping while Melissa, wearing a skimpy negligee, tries to wake him for sex. He hautily refuses, throwing her off of him, and their encounter escalates in violence as he goes to leave, ending their relationship. Crewe eventually responds to her slaps and scratches by squeezing his hand over her face and then throwing her onto the ground. Despite her taunting, it plays as mean-spirited misogyny now.

He steals her Maserati -- actually a Citroën SM, a well-made but spectacularly ugly European import -- leads police on the sort of wild smash-up chase that became a hallmark of Reynolds movies, drives the car into the bay and later drunkenly assaults a couple of officers. Somehow this results in a sentence of just 18 months with parole.

Unfortunately, Warden Hazen (Eddie Albert) threatens to find ways to extend Crewe's sentence and make his time as miserable as possible. He's assigned to the swamp reclamation crew, which basically consists of just shoveling out muck and then slopping it back in. The other prisoners target him as "Golden Boy," contemptuous of someone who had it all as a pro quarterback and cheated his way out of the game.

Eventually he forms a bond with a few, notably Caretaker (James Hampton), the apple pie-faced hustler who can get you anything inside the prison, from drugs to getting laid... with an actual woman! Michael Conrad plays Nate Scarboro, an older NFL veteran who is recruited as coach. Nothing is ever whispered about either man's life or how they ended up in prison.

The middle section of the movie is the standard "putting the team together" sequence, much like "The Dirty Dozen," where men are briefly featured as they join the team, and then their struggles coming together as teammates.

Unfortunately, the movie introduces guys and then almost immediately shunts them to the collective background. We meet Samson (Richard Kiel), a super-strong giant with a bit of a glass jaw, who continues to stand out simply because of being 7'2". But Sonny (Sonny Shroyer), a simple-minded hayseed, gets lost in the shuffle, as do most of the others.

Even Shokner (Robert Tessier), the bald-headed murderer feared by every man in the prison, is given a lavish introduction and then quickly becomes just another piece of beef in a football helmet. Crewe and Caretaker talk about how Shokner knows karate, so we keep expecting him to pull some chock-socky moves on the gridiron that never arrive.

The film was notable for using a lot of real former football players, including from the NFL, Canadian leagues and big-name college programs. These include Mike Henry, Joe Kapp, Ernie Wheelwright and Sonny Sixkiller. The most notable was Green Bay Packers legend Ray Nitschke as Bogdanski, the most fearsome player on the Guardsmen team.

In perhaps the film's signature moment, and certainly one of its genuinely funniest, Crew intentionally hurls the ball into Bogdanski's crotch in retaliation for his dirty play, leaving him stunned and woozy. Then for good measure, they do it again on the following play.

Stern-faced Ed Lauter plays Wilhelm Knauer, the guard captain and leader of their team. He beats Crewe to a pulp on a couple of occasions, but ultimately comes to respect him in the end. John Steadman is Pop, the prototypical elderly prisoner who serves as a warning beacon to Crewe. Harry Caesar plays Granville, an older African-American who is the first black man to sign onto the team and becomes its soul.

Charles Tyner is Unger, the uber-creepy prisoner who takes an unhealthy like to Crewe, then tries to kill him when his advances are rejected. (This is close as the movie comes to addressing sexual relationships between male prisoners.) Alas, Caretaker instead becomes the unintended victim of Unger's light bulb arson trap.

Bernadette Peters turns up briefly as the warden's secretary, sporting a truly magnificent bouffant of blonde hair. She acts very surly and distant but later solicits sex from Crew in exchange for access to the guards' medical records and practice films. This time, the transactional nature of sex doesn't seem to bother him.

The last third of the movie is the game itself, filmed mostly in long shots from the sidelines peppered with close-ups in the huddle or when Crewe is calling audibles. Aldrich occasionally mixes in some split-screen, sometimes with three or even four images in the frame, but they're cropped poorly and not very effective.

In general I think you'd get a better game on contemporaneous TV, even with 1974 technology.

In my opinion, "The Longest Yard" isn't a particularly standout role for Reynolds, who found overnight success with 1972's "Deliverance" after struggling for 15 years in television and low-budget movies -- describing himself as a "well-known unknown."

"The Longest Yard" along with "White Lightning," "Gator" and culminating with "Smokey and the Bandit" solidified Reynolds' star persona: the cackling, macho scamp who always seems to be operating just on either side of the law. The keening, high-pitched laughter that would become his aural trademark is heard several times throughout "Yard."

By 2020 Reynolds is now firmly in the dim past of America's cultural memory, but for a good dozen years or so he represented the apogee of male sex symbol. Dark and brooding looks tempered with an easy smile and twinkle in the eye made him a hot commodity at the box office and in pop culture.

His nude centerfold in Cosmopolitan in 1972 was perhaps one of the unwittingly greatest PR moves in Hollywood history, though he later said he regretted it. His generously hirsute torso seems practically bestial compared to the denuded times in which we now live. Thick and muscular in "Deliverance," his body is appropriately more wasted in here, befitting a character who probably only exercised regularly when he was getting a paycheck for it.

With the arrival of shaved, 'roided-up figures like Schwarzenegger and Stallone in the mid-1980s, Reynolds' day as an A-lister was effectively done.

So "The Longest Yard" isn't a deep character study, a laugh-out-loud comedy or a good football movie. I liked a lot of the ingredients that went into it but not how they were assembled. If I knew nothing about the film's history I would guess it was a pretty average-ish flick that was soon forgotten.

This movie is like the nobody in high school who become a multimillionaire, but nobody can really figure out why.