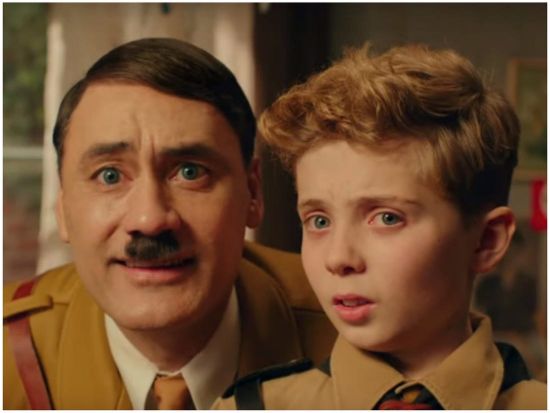 I’ve been reading anonymous testimonials from Oscar voters who said they wouldn’t even watch “Jojo Rabbit” because they found the premise offensive. With the proviso that they should do their job, it is a tough subject matter, especially when you just blurt it out:

In Nazi Germany, a young boy struggles to make his way after his father goes missing in the war, substituting in his imaginary best friend, Adolf Hitler.

Yeah, I know. Doesn’t exactly sound like the setup for a great comedy, does it?

Give “Jojo” a try, because it’s a terrific movie with wonderful performances -- including Scarlett Johansson as the mother, who deservedly got an Oscar nomination out of it.

Jojo (Roman Griffin Davis) struggles to fit in with the other kids in the Hitler Youth club. Sam Rockwell and Rebel Wilson play hilariously inept/cynical instructors putting the kids through the motions. Jojo gets blown up by a hand grenade during training, suffering scars to his face that make him even more self-conscious.

His only real solace is talking to Hitler, played by Taika Waititi, who also wrote and directed the film. Hitler is sympathetic and helpful, but there’s also a clear note of manipulation to their interactions.

Things grow more complicated when Jojo discovers Elsa (Thomasin McKenzie), a slightly older Jewish girl, living in a hidden space in their house. He’s old enough to realize this means his mom, Rosie, is hiding her there and that if he turned the girl in his family would be broken up. So they slowly start to interact, with the start of a friendship and maybe even an adolescent romance growingt there.

Yes, “Jojo Rabbit” has a little bit of a “quirky for quirky’s sake” vibe to it. But it’s weirdly entertaining, and despite the jokes we find ourselves growing quite attached to these characters.

It may seem strange to feel something for German Nazis, but this is a dark comedy that finds a little bit of humanity in everyone.

Bonus features include outtakes, three deleted sense, a feature-length commentary track by Waititi and a making-of documentary, “Inside Jojo.”