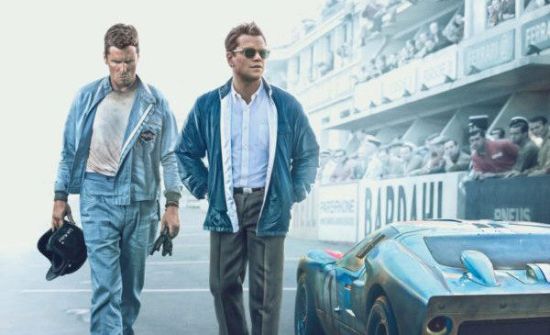 Sports movies are seldom big hits, and car racing movies in particular have historically been seen as box office poison. Even rarer still is for such films to receive praise from their peers in the form of industry awards.

“Ford v Ferrari” is that exceptional success story, a truly terrific racing movie that sold a lot of tickets and got four Oscar nominations, including Best Picture. It’s certainly one of my favorite movies of 2019.

One of the reasons this film is so enjoyable is that while the racing scenes are directed very well by James Mangold, they’re not the heart of the movie. That’s the relationship between Caroll Shelby (Matt Damon), an ex-racer and struggling designer, and stubborn British driver Ken Miles (Christian Bale).

These are very different men, at least upon first glance. Shelby is an affable cowboy/gearhead who’s a natural leader. He knows when to stand tall and when to compromise, which he knows he must do in accepting the lead of Ford Motor Company’s nascent racing team. Henry Ford II (Tracy Letts) wants to show up his nemesis, Enzo Ferrari, who has dominated the 24 Hours of Le Mans, winning seven of the last eight races.

On the other side of the coin is Miles, who is an independent-minded purist. All he wants is to run the best race possible in the best car he can pull together – which he often does, by himself, with spare parts. He has to be convinced – pushed, literally – to accept the job of lead driver for Ford.

In the end, these two men forged an everlasting bond while accomplishing one of the greatest feats in sports history… even if it’s one most people have never heard of before.

Remember when the Americans beat the Soviet Union in hockey at the Olympics? The Russians were mere pikers when it came to dominating their sport like the Italians had Le Mans.

The script didn’t get an Oscar nomination, which seems like an oversight, while Bale getting snubbed in the Best Supporting Actor category will go down as one of the Academy’s bigger flubs. “Ford v Ferrari” goes as fast and as far as any speed flick ever has.

There aren’t a lot of video extras, but what they have is substantive. There’s a pre-visualization of the race sequences used to map out the action beforehand; “The 24 Hour Le Mans: Recreating the Course” featurette, which looks at how archival footage was used to reconstruct the track; and “Bringing The Rivalry to Life,” a one-hour documentary on the making of the film.