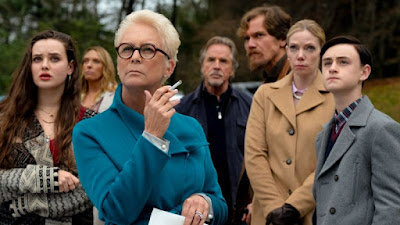 "Knives Out" is a supremely entertaining movie, though it's not hard to discern what it's all about: poking fun at the conventions of the Agatha Christie-style murder/mystery while wantonly indulging in every single trope inherent to the drama.

It ended up earning writer/director Rian Johnson, late of the much-maligned "The Last Jedi" entry in the Star Wars saga, an Academy Award for his original screenplay. It is indeed an intricate instrument of misdirection and humor, pointing the audience this way and yanking them that way, while forcing us to look here when we should be looking there.

It's a fun movie with a "big twist" that you know is coming, though still devilishly difficult to guess. It's the sort of flick you walk out of theater overhearing somebody loudly proclaim, "I saw it coming all along!", and know he's a dirty liar.

It's the prototypical "mansion with a dead guy and a bunch of suspects" setup. The uber-wealthy Thrombey clan has just encountered the death of patriarch Harlan (Christopher Plummer), a famous mystery novelist, under suspicious circumstances. It appears he took his own life, but is this really true?

Benoit Blanc (Daniel Craig) is the Southern-fried private investigator on the case. Certainly there is not shortage of people with sufficient motive to see Harlan dead. This includes:
Other characters floating around the story are the police detective (Lakeith Stanfield) who outsources most of the detecting to Blanc; Katherine Langford as one of the nicer grandchildren; and Marta (Ana de Armas), Harlan's caretaker who was much closer to him than any of his own children.

Far be it from me to give anything away. All I will say is that "Knives Out" is that rare movie that seems to dare the audience to guess where it's going, but always manages to stay a few steps ahead.

I wouldn't call this one of the best movies of 2019, as some have. In the end it's a fun, clever movie that exists to be fun and clever. Is that really such a bad thing?

Video extras are quite comprehensive. Johnson provides a feature-length commentary track along with his director of photography, Steve Yedlin, and actor Noah Segan, who has a rather small part. Johnson also provides his own "In-Theatre" commentary and stars in his own featurette, "Planning the Perfect Murder."

Additionally there are two deleted scenes with commentary, a Q&A with director and cast, some marketing photos and "Meet the Thrombeys" viral ads, and "Making a Murder," an eight-part making-of documentary.