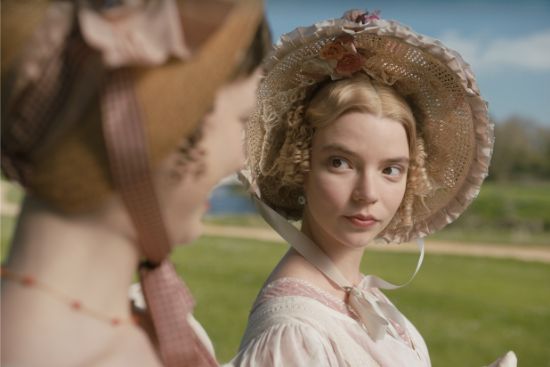 “If I loved you less, I might be able to talk about it more.”
--George Knightley

I confess I do not have anything more than a hazy recollection of 1996’s “Emma” starring Gwyneth Paltrow, the second major film adaptation of Jane Austen’s iconic novel. Many saw it as a cinematic watershed, but its inability to last long in memory is a generally good indicator of my disagreement.

The third, nearly a quarter-century later and starring Anya Taylor-Joy as the intrepid Emma Woodhouse, surely will.

This is a sumptuous, mature and vibrant telling that cleaves quite closely to Austen’s novel. The book concerns itself with the trivialities of 1800s British aristocracy, and yet the movie has such a depth of feeling that it seems about the most important of things: love, trust, family, fellowship.

I am astonished to learn that director Autumn de Wilde and screenwriter Eleanor Catton are both rookies making their feature film debuts. (Though de Wilde is a veteran of music videos.) This feels like the sort of confident, authentic work of people completing their dozenth movie, not their first.

At the center is Taylor-Joy, who announced herself with authority while still a teenager in “The Witch.” With her preternaturally wide, wise eyes and soft but direct voice, she is very much the picture of a pampered and privileged young noblewoman of countless blessings -- “handsome, clever and rich,” in Austen’s introduction.

Emma is sort of a kindlier version of Glenn Close’s carnivorous marquis from “Dangerous Liaisons,” a self-appointed matchmaker and string-puller. Instead of the intrigue of the Paris royal court we have the pastoral affairs of the town of Highbury where Emma plies her trade. She loves to make marriages while eschewing the notion mightily herself.

She lives with her father (Bill Nighy), a widower who is constantly terrified of chilly drafts and boring parties. He’s a stiff and a snob, but in a charmingly retiring way. Their constant companion is their neighbor, George Knightley (Johnny Flynn), who came into his considerable inheritance at a young age. He and Emma enjoy a friendly sibling-type rivalry, cattily exchanging barbs and remonstrations.

Flynn’s Mr. Knightley is fetching in a rough, scarred sort of way, and pokes fun at his more dandy-ish colleagues who drive a carriage 17 miles to London and back for a haircut. Flynn is briefly nude in an early scene for no reason I can detect, and if it were not for this the movie would not even warrant its mild PG rating.

As the story opens, Emma successfully fends off a marriage proposal from country squire Robert Martin (Conor Swindells) for the hand of her best friend, Harriet Smith (Mia Goth), an orphan of low station but pure heart. Instead she intends to match Harriet with the obsequious local vicar, Mr. Elton (Josh O’Connor), but finds her interpretation of the lines of affection at cross ends.

Two figures are much talked about but do not actually arrive until nearly midway through the movie, shaking up the state of Highbury’s gossiping and hobnobbing. Frank Churchill (Callum Turner) is the son of Emma’s former governess’ new husband, and is thought quite handsome and charming, especially by himself. Jane Fairfax is another orphan of little means but is well-educated and accomplished, provoking Emma’s seething jealousy.

If you don’t recall the book or previous movies, I won’t spoil the fun of the various romantic intrigues, as unexpected assignations occur and fleeting exchanges of manners are misinterpreted as testaments of undying love. It’s all so very British.

Yes, it seems quite frivolous at first. But the cast and crew invest great import and emotion into their words and deeds. Here is a lovely, musical film that shows us the difference between wealth and gentility, and between romance and true affection.