Review: "The Call of the Wild" 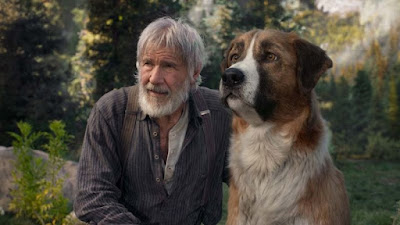 No, the CGI dog isn’t that great. Is it terrible? It certainly didn’t play well in the trailers for “The Call of the Wild.” And people have enjoyed dunking on the movie for the weird dynamic of using a human actor in green spandex to act out the part of a giant canine, which animators then digitally painted over.

But you know what? It actually doesn’t matter that much. The CGI may be a bit jarring at first next to a bunch of humans, but by 10 minutes in it didn’t bother me anymore. It’s probably not much worse than the critters in “The Lion King” from last year, the difference being there were no humans to foul up the juxtaposition.

I went into “The Call of the Wild” not expecting much. Honestly, I only went because my boys saw the trailer during “Sonic the Hedgehog” and insisted they wanted to see it. Pick them up from school, a little Chick fil-A, a boys’ night out and momma gets some well-earned solo time.

So I was surprised to find myself increasingly engaged in the story of Buck, the spoiled dog who is shipped off to Alaska for a life of adventure and peril in Jack London’s iconic novel. By the time he’s dog-napped from a comfortable existence as the pet of a wealthy judge and winds up part of a dog sled team, the animation issue had already slid away.

As good as the first half is, the second is pretty spectacular. Harrison Ford only shows up a couple of times during the early going, and in fact at first I was worried he was only going to be a bit player.
But his character, John Thornton, and Buck reunite around the 40-minute mark and the rest of the way it’s all about their relationship.

This is truly one of Ford’s most sensitive and soulful performances. I know that may sound strange for a dog movie, but it is so. There’s no steely hint of the action hero he was for so many decades, or the rapscallion charm of Indy or Han. It’s a truly vulnerable performance you can’t get out of a younger actor.

His John Thornton is a man steeped in regret, who has come to Alaska to make one last attempt at finding meaning in a life that has fallen into shambles. His son, who always dreamed of going on an adventure in the hinterlands, passed away and it eventually doomed his marriage. He spends his days in a tent on a hill outside town, drinking and stewing.

It is not an exaggeration to say that John probably wouldn’t have lived much longer without meeting Buck.

They leave the prospecting village, where Buck had been part of the mail delivery team, and go off for that adventure. It’s not too difficult to see that John is substituting the dog for the son he lost. But it gives him purpose and drive again.

As you may remember from childhood readings, Buck falls in with a pack of timber wolves, and spends more and more of his time away from John. The man is old and wise enough not to resent this, seeing it less as a fraying of bonds as the natural evolution of a pup who must eventually leave one family and start one of his own.

The movie, directed by Chris Sanders (“Lilo & Stitch”) from a screenplay by Michael Green, follows the first part of the novel fairly well but departs in significant ways in the second. There are no other prospector partners for John, no attacks and reprisals on savage Indians (with not-terribly-concealed racial animus).

The search for gold is wholly dispensed with as a worthy endeavor; John and Buck travel to the edge of the world and find the mythical “lost cabin” that supposedly marks the way to a fortune of gold, and in fact they quickly find large nuggets of the stuff in the nearby river. But John uses it as pieces on a chess board or stuffs it into his pockets like lost buttons.

Dan Stevens plays Hal, the villain of the piece who does covet gold for its own end. If there’s a quibble to be had with the movie, it’s the sneering cartoonishness of this character, as he’s written and played. John and Buck encounter him early in the story, and Hal forms a hatred for them that seems far out of proportion to any offense they gave.

They may as well have named him Snidely and given him extravagant mustachios to twirl.

But, like the animation that brings Buck to life, this weakness quickly recedes in importance. The heart and soul of this movie is the bond between man and dog, and how two who are lost find a semblance of home in each other’s companionship.

There’s a wonderful stillness to this movie that we don’t see much at the cinema anymore. I reveled in scenes of Buck and John just encountering a beautiful vista, and simply stopping for a moment to take it all in. At 100 minutes, this is the rare movie that neither tarries nor feels like it’s in too much of a hurry.

I went to “The Call of the Wild” to kill time, and came away genuinely moved, and rejuvenated.

Posted by Christopher Lloyd at 9:36 AM