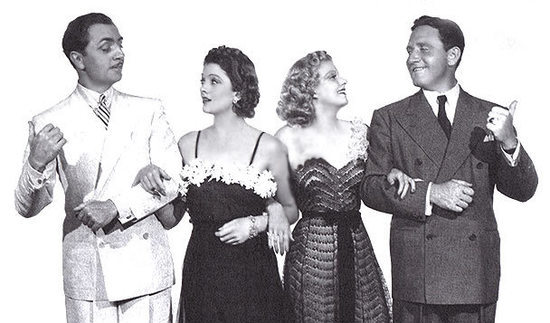 A classic screwball comedy featuring a rare love quadrangle, "Libeled Lady" isn't so much about newspapers as presenting a fast-paced, amusing farce for Depression-era audiences.

I sought out this film thinking it was set against the backdrop of frenetic newsrooms a la "His Girl Friday." But the truth is the journalism angle is just a jumping-off point for a whole lot of verbal sparring and pitching of woo. Still, I didn't come away disappointed.

It was the fifth of 14 screen pairings between Myrna Loy and William Powell, most famously for the "Thin Man" films. It was also Powell's second appearance with Jean Harlow, who was his real-life lady love at the time. The following year was a tragic one for the couple, as Harlow died unexpectedly at just 26, while Powell was diagnosed with cancer which, along with his grief for Harlow, resulted in a one-year absence from filmmaking.

His and costar Spencer Tracy's characters quite literally swap wives during the movie, and something like that occurred behind the scenes, too. Harlow wanted to play Powell's romantic counterpart so she could canoodle onscreen with her beau. But the studio, eager for another popular Powell/Loy match, overruled Harlow and stuck her with Tracy who, if rumors are true, was romancing Loy throughout the shoot.

Coupled with the serpentine plot of "Libeled Lady," you practically need a navigation table to plot all the real and fictional love lines.

If there was a sure-fire formula to please Depression audiences, it was movies about rich people falling in and out of love. Loy plays the titular character, Connie Allenbury, international playgirl daughter of tycoon James Allenbury (Walter Connolly). The story opens with The New York Evening Star, edited by Warren Haggerty (Tracy), accidentally running an item accusing Connie of being a husband-stealer.

They retract the story immediately but a few errant newspapers make it to the street, leading Connie to launch a vindictive $5 million slam-dunk libel lawsuit that will surely doom the rag and leave its 500 employees jobless. Among them Warren, who puts off his marriage to Gladys Benton (Harlow) to deal with the blowback. This is not the first time Warren has run from the altar, placing the paper above romance, and Gladys has had her fill.

If you're thinking this is one of those quintessential tales where newspapermen and -women courageously fight for truth and justice -- that's some other movie. Here Warren and his crew immediately launch a scheme to entrap Connie in an actual affair with a married man, splash it across the front page and make her drop the suit.

(That wouldn't actually change the fact the Star libeled Connie, but the rat-a-tat-tat screenplay -- by Maurine Dallas Watkins, Howard Emmett Rogers and George Oppenheimer -- never thinks more than a step or two ahead.)

Warren enlists Bill Chandler (Powell), a ladies' man who used to work for him, to pull off the ruse. To make it legal, Bill gets a quickie marriage to Gladys, much to the latter's consternation, and they set themselves up in the honeymoon suite of a swank hotel. Soon enough, Gladys realizes that Bill is much more charming and attentive than Warren, and thinks about trading in her wayward fiance for her fake husband.

For his part, Bill extracts a contract for $50,000 -- almost $900k in today's dollars -- to save Warren's neck. Did I mention that most of the characters in this story are thoroughly unlikable? Strangely enough, between the foursome's plotting, back-stabbing and pettiness, it's actually Old Man Allenbury who comes off looking the most pure-hearted of the lot.

At first, Connie is thoroughly resistant to Bill's charm, as they sail on the Queen Anne from London to New York. She sees him as just another upjumped suitor looking for a payday from a famously rich family. Bill later tries to ingratiate himself with her father by studying up on his favorite pastime, angling for trout, leading to some amusing physical comedy at a stream.

After a late-night swim and some sharing of personal stories, Connie does fall for Bill, and vice-versa. He tries to convince her to drop the lawsuit without having to resort to Warren's plan to humiliate her. Meanwhile, Gladys' (repeatedly foiled) plan to barge in as the scorned wife takes on all-too-real note as she finds herself genuinely jealous.

Both Tracy Powell cut sharp figures in the double-breasted suits popular in 1930s big cities. Neither actor is what you'd call classically handsome, with Powell coming across as a weak-chinned dandy and Tracy as a striving peasant type.

For that matter, I admit I've never grasped the physical appeal of Harlow or Loy, the blonde and brunette yin and yang of the movie, with the former as the cheap, pushy broad and the latter playing the snooty heiress. Both had bob haircuts and those ferociously plucked eyebrows of the era that rendered them looking perpetually astonished.

Directed by journeyman Jack Conway, who made pictures from the 1910s to the late '40s, "Libeled Lady" is a straightforward comedy that isn't about anything or than having a little fun. It's a refreshing piece of pure entertainment from a time when people very much needed such things.