Video review: "A Wrinkle in Time" 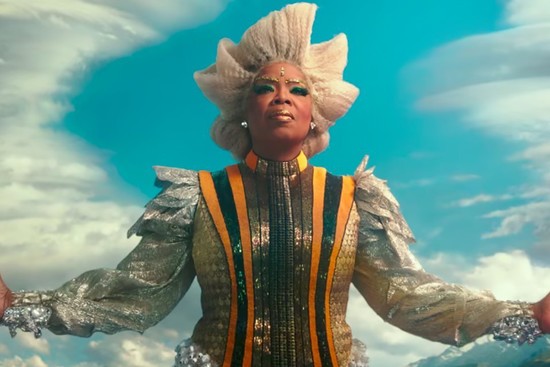 I never hope for a movie to be a box office failure, but let’s just say I take a certain perverse sense of satisfaction when poor efforts garner similar results. “A Wrinkle in Time,” based on the children’s novel by Madeleine L'Engle, wasn’t exactly a financial disaster, earning $129 million worldwide.

But it was a big, expensive movie, the first time an African-American female director (Ava DuVernay) was entrusted with a nine-figure budget. And “Wrinkle” did not do “Black Panther” numbers.

Dollars and sense aside, the movie is just a discombobulated mess. Unless you’ve read the book, you’ll spend much of your time trying to puzzle out who the characters are and where the sci-fi/fantasy story is going.

Storm Reid plays Meg Murray, a forlorn girl of about 12 who is pining for her long-lost dad, a scientist who disappeared several years ago. She finds herself spirited away on a journey through the cosmos, with three mystical beings called the Missuses guiding the way.

Chief among them is Miss Which, a queenly sort played by Oprah Winfrey. Like her sisters (Mindy Kaling and Reese Witherspoon), they look like bedazzled women who wear lavish wedding dresses for every occasion.

Tagging along with Meg are her chirpy 6-year-old brother, Charles Wallace (Deric McCabe), and Calvin (Levi Miller), a handsome lad her own age who’s very supportive and nonthreatening. The cast also includes Chris Pine as the dad; Gugu Mbatha-Raw as the mom; Zach Galifianakis as the Happy Medium, a kooky advice-giving sort; and Michael Peña as Red, a crimson fellow who offers some assistance.

It’s a beautiful, colorful film -- imagine Willy Wonka’s chocolate factory in space, with fantastical creatures and warp-holes. But eventually we become listless at the uninspired storytelling.

Video extras are pretty generous. They include an expansive making-of documentary; four deleted scenes with commentary; a feature-length audio commentary track with DuVernay and a half-dozen of her key crew members; blooper reel; and two music videos.