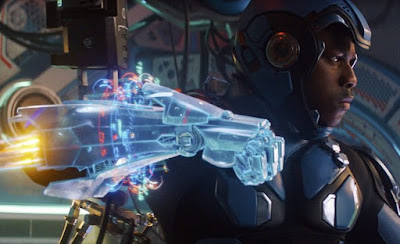 “Pacific Rim” was one of the best science fiction/action movies of the past decade, a rousing war between giant human-controlled robots and invading alien behemoths, but its unnecessary sequel is a pale shadow. It expels stars Charlie Hunnam and Rinko Kikuchi (except for a cameo by the latter), the screenwriting team and director Guillermo del Toro (“The Shape of Water”).

It’s rarely a good thing when a movie swaps out its entire creative team and most of the cast, and my fears were well-founded.

As the film opens, it’s 10 years after the menacing kaiju monsters were defeated and the portal into their world sealed. For some reason, the world has continued to build jaeger robots and train humans to pilot them. There seems little strategic value in this, other than preparing for a movie sequel.

Jake, who’s been spending his time scrounging and partying, gets recruited back into the jaeger program, where he butts heads with old adversary, straitlaced Nate (Scott Eastwood). Much macho strutting ensues. Tagging along is Amara (Cailee), a teen rascal who’s been building her own (smaller) jaegers out of scrap parts.

The dweeby scientist duo of Newton and Hermann is back (Charlie Day and Burn Gorman), pretty much the only returning cast members with significant parts. Tian Jing plays the CEO of an evil jaeger-building corporation that wants to help save the word, and lighten its pocketbook.

The beast-vs.-mech throwdowns are still a lot of fun, though I was disappointed the jaegers have gotten a lot smoother and more civilized since last time. I liked when they were clanky and slow, looking like something people had built. There are more group battles but less gore, which is good and bad, respectively, at least if you’re a fan of this stuff.

I don’t know why they made “Pacific Rim Uprising.” The last movie tied things up in a nice bow, and this sequel just unravels the knot for no good reason. It’s entertaining, but forgettable.

Bonus features are rather nice. There’s a feature-length commentary audio track by DeKnight and a handful of deleted scenes with more commentary by the director. It also comes with 10 making-of documentary shorts, touching on various aspects of production, deeper dives into some of the supporting characters, and more.