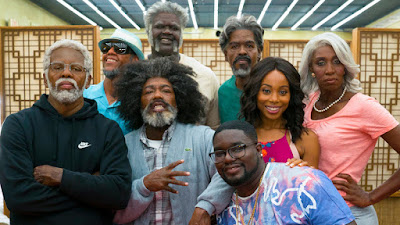 The idea for “Uncle Drew” came from a television commercial. You’ve seen those ads where NBA players (or athletes from other sports) dress up as old men, challenge young studs to a game, generating much ridicule, and then proceed to blow them off the court? Here’s an hour-and-three-quarters of that.

You may be appalled, but we’ve had movies adapted out of video games and theme park rides, so why not a clever bit of commercial video? I mean, those Neanderthals wearing business suits got a whole TV show.

Despite, or perhaps because of its progeny, it turns out that “Uncle Drew” is a big bag of yucks. Kyrie Irving of the Boston Celtics plays the titular character, a legend of the New York City blacktop game who suddenly disappeared 50 years ago right before the finals of the legendary Rucker Park tournament. Now he’s back to bring love to the game, and maybe teach a few life lessons along the way.

“Play the game the right way, and it fixes everything,” he practically purrs.

Lil Rel Howery is the ostensible main character, a pudgy little man named Dax who coaches the team. His own hoop dreams were shattered years ago when he had his game-winning shot blocked by Mookie (Nick Kroll), a taunting jagoff who’s white to boot. In the opening minutes Mookie steals his star player, Casper (Aaron Gordon) and his girlfriend, Jess (Tiffany Haddish), an annoying harpy who wasn’t really much of a loss.

The elders at the corner barbershop (JB Smoove and Mike Epps chief among them) urge Dax to seek out Uncle Drew, who’s more ghost than man these days. But he manages to track Drew down, see that his skills haven’t diminished much even at age seventy-something, and talks him into rounding up his old teammates for one last go.

In point of fact, Dax barely has to make his pitch before Drew has agreed, so we sense he’s just been waiting for this chance at redemption.

The middle part of the movie is the familiar “putting the band back together” bit, as we encounter old pals in their far-flung situations and sign them up. They cruise around in Drew’s ‘70s-era van, complete with shag carpeting and a bench area in the back he refers to as “the Boom-Boom Room.”

Given his reputation with the ladies, it’s an operational, rather than aspirational term.

Old rivalries are revived, too, especially with Big Fella (Shaquille O’Neal) -- that’s actually the only name he’s ever given -- a mammoth man who now teaches martial arts to kid and wears a ridiculous salt-and-pepper fu manchu goatee and vaguely Wolverine-esque afro. Shaq is an entertaining presence, and even pokes fun at his earlier film roles.

Chris Webber is Preach, who’s now a bent-over reverend with a gravely growl and a bad prostate. Reggie Miller plays Lights, a shooter who’s gone blind but still believes every shot is going to be a swish. Lisa Leslie is Betty Lou, Preach’s cantankerous wife who doesn’t like him running off, and gives chase. She’s suspiciously tall for a reverend’s wife.

The age makeup they all wear varies in credibility. Shaq and Reggie look pretty much the same as they normally do, though they’re closer in age to the fictional Drew than the actual Kyrie. It took me a long time to place Webber as Preach. Best of all is Nate Robinson as Boots, who I actually took to be some 1970s NBA star at first.

Boots hasn’t spoken or stepped out of his wheelchair in a year, but this is the sort of movie with convenient miracles in the offing. Erica Ash plays Boots’ very cute and available granddaughter.

Directed by Charles Stone III (“Drumline”) from a script by Jay Longino, “Uncle Drew” boasts heaping helpings of laughs and dazzling court moves. The talkie scenes drag, and Irving as Drew only seems to have one speed: raspy wisdom interspersed with calling whoever he’s talking to “youngblood.”

The simple fact is I enjoyed spending time with these characters. It’s ridiculous to think that men who’ve seen three-quarters of a century can break ankles with crossovers or dunk like Dr. J. But then it’s hard to believe they could make a whole film out of a TV commercial and actually have it turn out as good as this.

Plus, this is the movie in which we get to see the glory that is Shaq’s ass. Wait, let’s hashtag that: #Shaqass. I think each cheek is bigger than Danny DeVito.