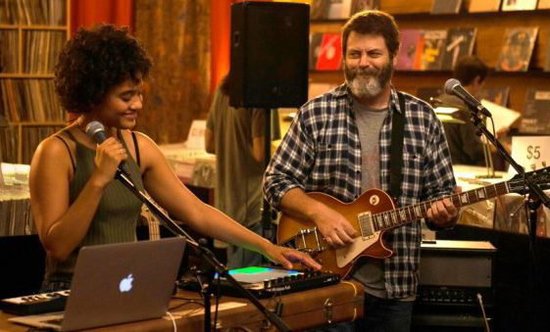 “Hearts Beat Loud” is a very different take on the familiar “putting together a band” movie. This band consists of just a middle-aged father and his teen daughter, the latter of whom has such disregard for their musical abilities that she insists, “We’re not a band” -- which becomes the group’s name.

And while there are the usual tantalizing dreams of cutting an album, topping the charts, going on tour, etc., we know pretty much from the get-go that this is not really in the cards.

This is not a film about finding fame, but learning to embrace the life you have.

Director Brett Haley, who co-wrote the script with Marc Basch, made the wonderful and (alas) little-scene drama, “The Hero,” last year. Both that film and this one have sadness and regret at their core, but also a strong sense of love and even a smidgen of hope. And they boast not a little humor, with “Hearts” being closer in form to an overt comedy.

It’s probably the best film role that Nick Offerman has had. A TV comedy king (“Parks and Recreation”), he’s been very busy with small supporting parts in mostly smaller movies (including “The Hero.”) Here he gets a chance to play the lead, in a meaty role as a guy going through life with a smirk on his face, but only to hide his pain and disappointment.

Frank Fisher had it all: he was young and in a hot band with a tremendously talented lead singer, who also became his wife and bore them a daughter, Sam (the absolutely radiant Kiersey Clemons). When his wife was killed in an accident, Frank came off the road and opened up Red Hook Records, a dive-ish shop in Brooklyn catering exclusively in LPs.

Seventeen years later, Sam is about to go off to UCLA to study medicine. The store is foundering, as Frank still loves music but is profoundly indifferent to people who want to buy music.

In the opening scene, be blows off a customer, preferring to listen to Jeff Tweedy on his headphones, refusing to put out his cigarette and generally annoying the guy enough he buys the record he had been looking at on Amazon, then taunts Frank, showing him the phone with the transaction. Frank probably deserved it.

What’s worse, Frank has come to realize that Sam sees him as deeply uncool. In fact, as she confides to Rose (Sasha Lane), a quirky artist’s assistant with whom she begins the bloom of first love, she chose a school in Los Angeles primarily to get away from home.

They’ve always dabbled in playing music together, he on guitar and she on keyboards, though these days Frank has to needle Sam to get her nose out of the books long enough to share their semi-regular “jam sesh.” One night, Sam pulls out a hook she’s been noodling with, Frank lays a guitar track on top of it, she sings a few lines and before you know it, they’ve got a song.

Frank is thrilled at this chance to make music and spend time with his daughter. He puts the song on Spotify and is astonished when it makes an indie playlist and gets lots of airtime. A record label guy stops by the store to chat him up. Soon his head is filled: maybe Sam could take a gap year while they go on tour and become rock gods?

Toni Collette is Leslie, Frank’s landlord, who’s also a friend and, he hopes, maybe something more. She cherishes the friendship but is wary about the more. Ted Danson plays Dave, silver of hair and tongue, who runs the neighborhood bar, dispensing “the good stuff” to favored patrons along with sage counsel. “We don’t always get to do what we love, Frankie, so we’ve got to love what we do.”

The music, by Keegan DeWitt, has a slightly dreamy quality, pulsating beats that build upon themselves as plaintive, almost whispered vocals crescendo into cascading emotional peaks and valleys. Clemons is a gifted singer; Offerman is not, though his vocals in a couple of songs have a genuine, rough poignancy.

“Hearts Beat Loud” is a portrait of a father and daughter coming together while at cross ends. Frank knows what he loves, but it’s remained elusive his whole life. Sam is smart enough to know she can’t live her dad’s dream for him, yet isn’t ready to walk out of his life just yet. Together, the music they make isn’t the means to stardom, but the ends of fortifying their bond.