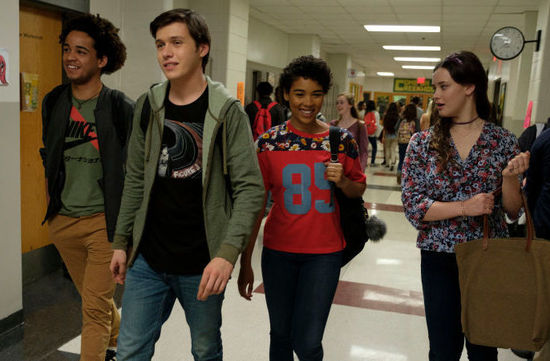 We’re nearly halfway through 2018 now, and “Love, Simon” remains my favorite movie of the year. That might have seemed like a leap when the dramatic teen comedy came out in March, but with nearly half the year gone, it’s only cemented the film’s place in my estimation.

It’s the story of a high school senior, Simon Spier, played winningly by Nick Robinson. He’s a typical Centennial -- he lives in a fast-paced world where social experiences are shared as much digitally as in person. The only difference from a 1980s romcom by John Hughes is that Simon is gay.

This is not a movie where Simon struggles with his sexuality -- he knows who he is and is fine with it. But he’s wrestling with how to come out to his friends and family. Then a strange thing happens: somebody using the pseudonym “Blue” writes about his own anxiety about coming out on the school message board.

He and Simon strike up a correspondence, and their romance blooms from afar. He knows he’s in love, just not with whom. He imagines various boys he encounters as being Blue.

Trouble arises when Simon’s correspondence is stolen by a classmate, who blackmails Simon into assisting him with his own romantic pursuits. This means manipulating his trio of best friends, Leah (Katherine Langford), Nick (Jorge Lendeborg Jr.) and Abby (Alexandra Shipp).

Jennifer Garner plays Simon’s mom and Josh Duhamel is the dad, and both offer authentic, loving presences in the background. Tony Hale plays the well-meaning but inept vice principal, and Logan Miller is Martin, the oddly not totally hate-able jerk yanking Simon’s chain.

“Love, Simon” is a smart, funny movie that is also holds keen observations and insights about what it’s like to be a gay teen, or any kind of teen, stumbling around in love in 2018.

Video extras are quite nice. They include a feature-length commentary track by director Greg Berlanti, producer Isaac Klausner and co-screenwriter Issac Aptaker, deleted scenes and a photo gallery from the set.

There are also five making-of documentary shorts: “The Adaptation,” which talks about turning the book by Becky Albertalli into a movie; “The Squad,” on the film’s casting process; “#FirstLoveStoryContest,” in which fans talk about their own first encounters with romance; “Dear Georgia” and “Dear Atlanta,” which focus on the filming locations and culture of Atlanta, where the book takes place and the film was shot.