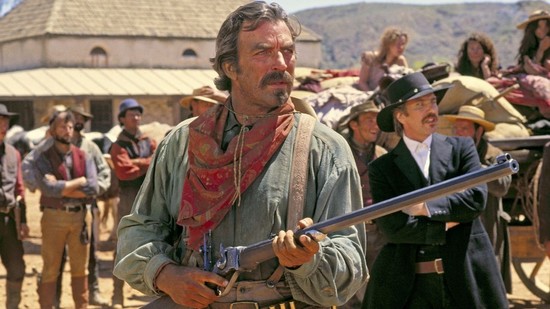 "Quigley Down Under" is the classic example of a terrific concept for a film, horribly executed. The end result is a complete garbage movie, a neo-Western that takes its hero so far out west, he gets turned around to the east.

It's a terrible-looking movie shot without subtlety or style, featuring awful costumes, atrocious acting, an insipid musical score (courtesy of Basil Poledouris) that feels compelled to squawk into every scene with its syrupy strings, stiff dialogue and no coherent directorial aesthetic other than "let's shoot stuff up."

Really the only redeeming thing about it is Alan Rickman as the sniveling bad guy, a bridge villain for the vivacious actor to chew on between Hans Gruber of "Die Hard" and the sheriff in "Robin Hood: Prince of Thieves" the following year.

The project was initially launched in the 1970s based on a script by John Hill, and actually went into production in 1980 with Steve McQueen starring as Matthew Quigley. He's an American sharpshooter who heads to Australia in the 1860s in answer to an advertisement, and ends up in a war with the rancher who wants him to kill Aborigines. But McQueen fell ill on the way to an early demise, and production shut down.

The concept languished until it was revived a decade later with Tom Selleck in the lead, with Simon Wincer directing fresh off the success of "Lonesome Dove" the previous year. Though the script went through many revisions with other writers, Hill retains sole credit.

Both Selleck and Wincer are/were very successful men in the medium of television, which is where they should have stuck. Other than the wide-screen aspect ratio, everything about the look and feel of "Quigley" screams "TV." The characters do not seem to exist outside of their time on the screen, and events roll forward with the sort of fungible logic necessary to point the story in the direction desired.

Example: Quigley undertakes a three-month journey from Wyoming to southwestern Australia based simply on a newspaper ad for the world's best marksman and the promise of $50 in gold upon arrival, without every learning what the actual job entails. When he finds out it's to kill Aborigiones, he promptly punches out the murderous rancher, Elliott Marston (Rickman), and initiates a conflict that will surely end with a heaping helping o' death.

First of all: I bet it cost him more than $50 just to make the trip. Who the hell undertakes such a mammoth voyage on spec, without even bothering to investigate the particulars of the job? We never learn anything about Quigley's life prior to coming to Australia, so he remains an amiable enigma. Any competent screenplay would give him something to run away from.

Second: If you're selling your skills as the world's best long-range rifleman, what exactly do you think is the market for those talents? People don't pay top dollar to shoot coyotes. Assassination seems pretty much the only viable high-return vocation available to him.

Things go along a predictable path, as Quigley tangles with Marston's henchmen right off the boat, and bumps into Crazy Cora (Laura San Giacomo), an unstable Texas woman being coerced into prostitution. She seems deliberately addled for most of the movie, insistently referring to Quigley as "Roy," which we subsequently find out is the name of her husband.

Cora is gifted with a tragic backstory, in which she smothered her own baby in fear of marauding (or not) Indians. But despite Giacomo's talents, the character is presented as more daffy than pitiable. She's the comic relief, instead of the emotional backbone of the piece.

The movie never gets anywhere near the bullseye of Cora's center.

The Aborigines lend them help at various times, and have it returned, but they're never presented as anything more than sanctified noble savages. And silent ones, too: none is given so much as a single line of dialogue.

Marston is a big believer in the quick-draw game, waxing poetic about the new Colt six-shooter, with which he practices daily. Take a wild guess what the final showdown entails.

Quigley, on the other hand, eschews sidearms in favor of a single weapon: the legendary Sharps, a breech-loading single-shot rifle first introduced in 1848, capable of accurate fire up to 1,000 yards in an era when most firefights happened at 50 feet or less. When offered a revolver on several occasion, Quigley refuses, saying he doesn't have much use for them, preferring to swing his Sharps as a cudgel for close combat.

(This is the same arm used by Burt Lancaster in "Valdez Is Coming," which was my entrée into this movie.)

Given Selleck's real-life association with the NRA, the scenes where he coos lovingly about his rifle take on a sinister air. His Sharps is modified to take .45-110 ammo -- which Quigley reloads personally, of course -- with four extra inches of barrel and a Vernier gunsite that allows him to adjust for the wind and such. It also has a double trigger, with the heavier touch setting the lighter one, for minimal movement when firing.

As a single shot weapon, the Sharps represents a bit of a logistical knot when it comes to cinematic storytelling. Because Quigley has to literally open the breech, manually insert a round and cock the lever each time to fire one bullet, that means he can't quickly down multiple targets. So director Wincer has to come up with some pretty cockamamie scenarios to justify his screwy tactics.

When opposed by a knot of men on several occasions, I kept waiting for one of them to shout, "He can only fire one bullet at a time. Rush him!!" But it never happens.

Again, with no backstory provided for Quigley, it's never explained why has this totemic fetish for only using the Sharps. A true weapons master would keep something else handy for close-up work. He's like a knight-errant who thinks he can fight an entire war employing only his lance.

Though, as we will see, when circumstances are forced upon him he's capable (if not enthusiastically willing) of making the swap.

Not surprisingly, "Quigley Down Under" has become a favorite amongst military personnel and long-range gun enthusiasts. Supposedly, the act of lining up two enemies so they can be taken out with a single bullet is colloquially known to U.S. military snipers as "a Quigley." There's even an annual shooting competition held in Montana that bears Quigley's name.

That's more of a legacy than other, better Westerns can boast.