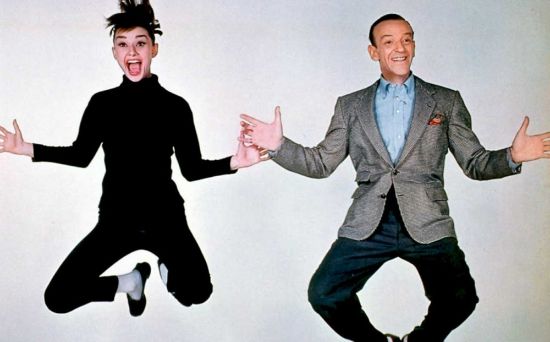 Most film observers consider "Funny Face" a beloved musical, but I'd place it toward the shallow end of director Stanley Donen's canon.

The story's pretty trite and predictable, the sort of thing where two people loathe each other right up until the moment they realize they're madly in love. Its view of male/female relationships hasn't aged particularly well. And it plays like a sendup of Beatnik culture by a bunch of squares who didn't realize they were about to be supplanted in popular culture.

Plus, it features several numbers by notable non-singer Audrey Hepburn, as well as Fred Astaire, an iconic dance-and-song man who never suffered any illusions about where his best talents lay.

Let's put it this way: I may have skipped ahead a bit during the many overlong hoofing scenes.

It was based on a Broadway musical from 1927 by George and Ira Gershwin that helped first make Astaire a star, playing opposite his sister, Adele. (Ewwww.) It was his first appearance in the top hat and tails that would become his signature look.

The story and most of the original songs were largely scrapped for the film version, written by Leonard Gershe, who actually wrote an earlier play that inspired "Funny Face."

Of course, Astaire was no spring chicken in 1957, creeping up on 60 and still trying a little too hard to hang with the cool kids. Hepburn was nearly 30 years his junior, though the onscreen contrast isn't too egregious. With the help of Hollywood makeup/lighting, his omnipresent toupee and a paucity of close-ups, Astaire reasonably passes for late 30s or early 40s.

He plays Dick Avery, star photographer for the fictional Quality magazine, the leading publication for women's fashion. Kay Thompson is Maggie Prescott, the domineering editor who's like a somewhat more benevolent version of Meryl Streep's Miranda Priestly from "The Devil Wears Prada." She's determined to base the entire magazine's identity around a single woman, one with intellect and ambition, but finds all the existing models too doltish to serve.

While taking over a bohemian book shop for an impromptu photo shoot, Dick notices the drab little clerk, Jo Stockton (Hepburn), has the hidden qualities of a girl who "thinks as well as she looks." They whisk her away to Paris for a photo shoot and launch of a major new fashion line by Paul Duval (Robert Flemyng), the world's most famous designer.

The running gag is that Jo is so intellectually bent that she keeps running away to cafes and lectures, and Dick has to chase her around to get her to come model. She's ensorcelled by the teachings of a French professor, Emile Flostre (Michel Auclair), but it turns out he's just a regular ol' meanie man who's interested in her for sex.

Jo's big obsession is "empathicalism," which I thought was a made-up word but is just a noun for the state of having empathy for others. Somehow Professor Flostre isn't empathic enough to tell that the woman he's putting moves on isn't interested, and he's rewarded with an expensive vase smashed over his head.

I did like some things about the movie. Thompson is a hoot as the charmingly snooty Maggie, who sings an opening number, "Think Pink!", forcing her small army of female hangers-on to don the aforementioned shade while swearing she wouldn't be caught dead doing so herself. It's nice to see a Golden Age era depiction of a 50ish woman where she's neither a mother or a lover.

Thompson was an intriguing figure who spent most of her showbiz career in the background as a musical director and vocal coach/arranger. She spent years promoting the career of Andy Williams -- and secretly canoodling with him, according to his autobiography -- and was the author of the "Eloise" series of children's books, based on her own childhood imaginary friend and alter ego.

None of the songs really stand out in one's memory, although "Bonjour, Paris!" comes closest, an energetic tromp through the city by the three main characters, converging on top of the Eiffel Tower. "'S Wonderful" was already a standard, though Astaire and Hepburn's duet of it lacks energy.

I did enjoy the slower, more romantic dance for "He Loves and She Loves," the culmination of a montage of Paris photo shoots that ends with her wearing a wedding dress. (The modern woman may be strong and independent, but she must eventually marry.)

They flit about in the gorgeous gardens outside an old church, and at one point dance onto a river raft, which carries them across the way so they can continue prancing on the other side. Lovely stuff.

Other musical numbers fall flat. Hepburn's free-form balletic dance moves in a free-thinking café is fun for about a minute, and then it just keeps going... and going. Thompson and Astaire doing the bumpkinish "Clap Yo' Hands" -- borrowed from another Gershwin play -- while impersonating a couple from Tallahassee is downright painful to watch.

After "Funny Face" and the subsequent "Silk Stockings" didn't fare very well at the box office, Astaire announced he was retiring from dancing on film. He continued to act in non-musical movies like "Ben-Hur" and "On the Beach," and did dance on television from time to time. He danced once more in a feature film, 1974's "The Towering Inferno," for which he received his only Oscar nomination.

As for Hepburn, she was right in the middle of a major phase of stardom that would continue for another decade or so before a self-imposed step-back from acting to focus on her family and humanitarian career.

Today it seems silly that Hepburn, one of the great beauties of the screen, could star in a movie premised on her being funny-looking. But she did break aesthetic barriers with her boyish haircuts and pixie-like features.

I wish I could say I found "Funny Face" as groundbreaking as its subject.