Review: "Dolemite Is My Name" 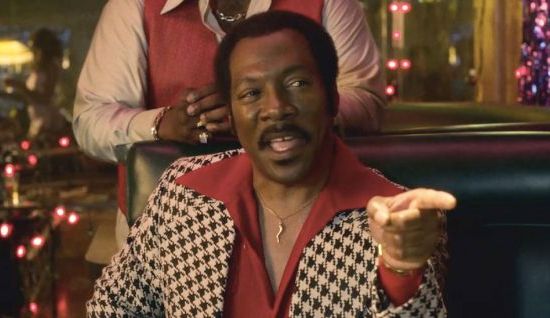 I went into “Dolemite Is My Name” without any foreknowledge; I only knew that it starred Eddie Murphy and was set in the 1970s. It was not until the film’s end credits that I learned it’s a biopic of a real person, singer/actor/comedian Rudy Ray Moore.

I’m not familiar with Moore’s 1975 film, “Dolemite,” or the ones that followed. I confess I’ve never delved deep into the Blaxploitation genre, as the ones I’ve seen are pretty silly and/or icky.

Interestingly, that’s one of the key themes of the movie: how white and black audiences value different things in their cinematic tastes. For example, nobody depicted in this movie would ever use the word “cinematic.”

There’s a terrific scene where Rudy (Murphy) and his buddies go to see “The Front Page,” a 1974 comedy starring Jack Lemmon and Walter Matthew as squabbling journalists. They peer around at the mostly white audience, laughing it up and enjoying the heck out of the picture, which they find completely unfunny and limp.

Where are the boobies, kung fu fighting and explosions? Rudy demands. That’s what black audiences want to see. So they set out to make their own movie for their own tribe.

It’s the best film role Eddie Murphy has had in years, playing an over-the-hill, 6th-rate comic who works in a record shop by day and does a lame emcee shtick at a local music club at night. He can’t even get the DJ (Snoop Dogg) of the little in-house radio station at the record store to play some of his old R&B 45s.

With an ample belly, thinning patch of hair that he covers with an afro wig and outlandish velour-and-polyester outfits, Murphy’s Rudy Ray Moore is a formerly cool guy grasping at the scraps of his youth. He moved to Los Angeles from his backwater home in Arkansas to make it big, and decades later he’s still small-time.

“I ain’t got nothin’ nobody wants,” he laments.

One day Rudy gets an idea to create a new act out of the boasting and jokes of the local “bums” -- using the parlance of the day – particularly their affinity for a mythological urban hero named Dolemite. His sex-and-braggadocio exploits are used as a common riff. Rudy pays them for their jokes, then assembles them to create the character of Dolemite for himself.

It’s an instant hit, and soon he’s touring the country doing the Dolemite act, cutting comedy records that inch their way up the Billboard charts, and even takes on a protégé in the form of Lady Reed (Da’Vine Joy Randolph), a plus-sized woman who’s spent her life being put down.

Remember how Rudy’s gang was mystified by the white-people comedy? That’s how I felt about the Dolemite act. There don’t appear to be any real jokes, just a series of put-downs and relating of endless sexual exploits. But audiences at black clubs eat it up.

It’s a telling dichotomy: African-Americans, after centuries of degradation, crave loud and boisterous self-affirmation; while privileged whites like me cling to humility as the lost virtue, and find such displays crass.

Despite his success, Rudy decides that to truly be a big star he needs to make a movie. He scrapes together some money and recruits his friends, adds some UCLA film students and a smattering of white actors to play the heavies, and unofficially takes over an abandoned hotel as their studio.

Of course, none of them know what the hell what they’re doing. So D’Urville Martin, an actual name actor played by Wesley Snipes, is recruited to co-star in the picture. Effete and snobby, he initially refuses until he’s offered the director’s chair -- a position he seems to hold only titularly, spending most of his days on the set drinking, having to be prodded to say “Action” or “Cut.”

The rest of the cast includes Mike Epps, Craig Robinson, Kodi Smit-McPhee, Chris Rock, Tituss Burgess, and a few other notables of black Hollywood. But the spotlight is clearly on Murphy here.

It’s an entertaining, thoroughly raunchy movie, directed by Craig Brewer from a screenplay by Scott Alexander and Larry Karaszewski. (All white guys, it should be noted.)

The movie also serves as an excellent time capsule of the cultural shift in the early- to mid-70s, a time when you could walk into a movie theater and see pornographic movies but record stores wouldn’t carry albums containing too much cursing.

“Dolemite Is My Name” is the story of a man whom popular culture had decided deserved to be a Lilliputian, but harbored gigantic ambitions that would not accept that judgment. Rudy Ray Moore willed himself into the star he felt he should be, despite not having any particular talent.

But he knew what his people wanted, and gave it to them. Whether what they wanted was worthy is above my pay grade.