Video review: "The Art of Self-Defense" 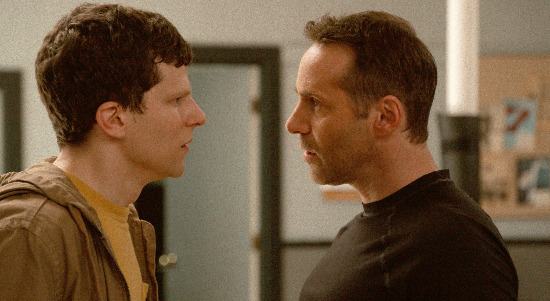 “The Art of Self-Defense” is one of those curious pictures that has a lot of things going for it but never really adds up to much.

It clearly is “influenced” by 1999’s seminal “Fight Club” – to use the polite word. Writer/director Casey Davies is looking to say something about the state of modern masculinity, how we’ve entered this strange bullied/bullier dichotomy where men are either strong and malevolent or weak and preyed upon.

It’s a very dark comedy, which is another way of saying there are few, if any, laugh-out-loud moments.

Jesse Eisenberg, king of ironic Millennial cinematic wimps – though Michael Cera might challenge to the throne – plays Casey, a lonesome fellow who works in the accounting department of some unnamed large company. One day while going to the store he is viciously beaten up by some hoodlums on motorcycles.

While recovering from his injuries he wanders into a karate dojo in the low-rent section of town and is bedazzled by Sensei (Alessandro Nivola), who wants his students to punch with their feet and kick with their hands. He is seemingly calm and soothing but also confrontational and disparaging.

We sense that he likes the martial arts because it allows him to establish a pecking order, clearly delineated by ranks and colored belts, with himself at the top of the chain. It soon becomes clear that he sees those he instructs not as students but recruits into his cult of personality.

Casey starts listening to heavy metal and acting in a belligerent way at the urging of Sensei. In becoming what he beheld, though, he finds little emotional fulfillment.

This is a very dour, wry movie. It seems more interested in imparting a lesson than telling a story. And even the tale it does tell is one we’ve heard before.

Not surprisingly for a low-budget indie that made little ripple at the box office, “The Art of Self-Defense” is rather sparse on video extras.

They include “An Important Message from Sensei” featuring Nivola, and short interviews with cast and crew. That’s it.