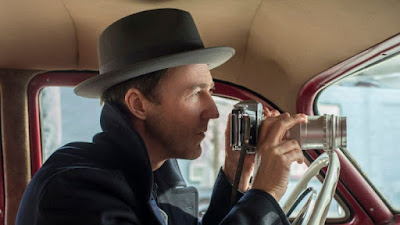 “Half the city is getting a ride on one of his horses.”
--Paul Randolph

It’s not a great movie, but it’s a damned interesting one.

This gorgeous and haunting crime drama, written, directed and starring Edward Norton, is like a beautiful chess board someone has set up with intricately carved pieces. You admire the handiwork that went into them and anticipate how they will be put to use.

Then you get ready to play, and they dump two more sets of pieces onto the board. What was a highfalutin parlor game becomes something of a chaotic mess.

Based on the novel by Jonathan Lethem, it’s set in 1950s New York City along the line dividing the slums, lowlife gumshoes and seedy jazz clubs from the skyscrapers, moneymen and spheres of politics. Norton is Lionel Essrog, the fifth man on the totem pole at a five-man private investigation firm who stumbles from the low end into the high.

Lionel is, by his own description, a mess. He has severe tics and outbursts of embarrassing words or sounds -- "if!" is the most common -- which today we would call Tourette syndrome. But back then it got him labeled as “spastic” or “freakshow,” and that’s by his friends.

“Bailey is what my head calls me,” Lionel explains, and many of his unwilling pronouncements are self-criticism using that nickname. He grew up in a rough foster home, protected by an older boy, Frank Minna (Bruce Willis), who later became a war hero, his boss and solitary backer.

Lionel’s brain makes all sorts of weird demands on him, like how objects must be ordered in a certain way or provoke another mortifying event. But it also gifts him with a tremendous memory and eye for detail. These are the tools he will bring to bear after Frank is murdered by some toughs sent by the big boys downtown.

The first third of the film is essentially a straight snooper story, and we are bedazzled and befuddled as Lionel travels from place to place, meets new people, takes pictures, tails cars and uncovers info. It’s shot in bright light and vibrant colors.

In the middle section, director Norton turns on the film noir look and mood, the action shifts largely to nighttime and shadows bend into the frame at odd angles. Lionel impersonates a reporter, asks lots of questions, inserts himself into the action and tries to assemble the pieces from the first part -- without much success.

The final act is the most vibrant, but also the most bewildering. There are shades of “Chinatown” by way of “Rain Man.” I enjoyed the hell out of it even as I struggled to make sense of it.

Other actors and story elements float in and out the film, sometimes disappearing for long stretches. The other three guys at the L&L investigation company -- Bobby Cannavale, Dallas Roberts and Ethan Suplee --  which also doubles as a car service when times are slow. Leslie Mann briefly turns up as Frank’s gun moll wife, as beautiful and hard as a nickel-plated .38.

Gugu Mbatha-Raw plays Laura Rose, a beautiful “colored girl” and smart lawyer who would seem to be at the center of whatever Frank was digging up. Cherry Jones as a crusading community organizer fighting the city’s race to convert working-class black neighborhoods into pristine public works. Michael K. Williams as a smooth and tortured jazz man. Willem Dafoe as a seemingly crazed fellow who hangs around the back of important rooms, says a lot and knows even more.

Lurking over the entire film like a threatening cloud is Alec Baldwin as Moses Randolph, a storied public servant who has labored to transform the city for 30 years. He is the commissioner of parks, construction and buildings, planning, and seemingly any other office he wants. Mayors and other elected officials come and go; Mo is eternal.

It’s a grandiose performance by Baldwin, who seems physically immense, like a charging buffalo shaved down and squeezed into a suit. He has a great scene where he and Lionel finally hash things out in a bath house, where Mo reveals his true nature while he describes what having power is really like.

Having true power, Mo explains, means when somebody else has an idea you don’t like, or you just don’t like the person who has it, then that idea goes away. He sees himself as a builder and a doer who denigrates the thinkers whose lofty dreams are never realized.

It’s a scarily mesmerizing soliloquy, not to mention a well-aimed dart at the mentality of those in real life holding the reins of power.

I sat back and marveled at “Motherless Brooklyn,” the keen way it evokes a place and time while effortless throwing off great writing like a description of being “calm as Hindu cows.” I can’t say I was completely engaged by the film; my guess is most people will find it confusing and scattershot.

But I was never less than fascinated.