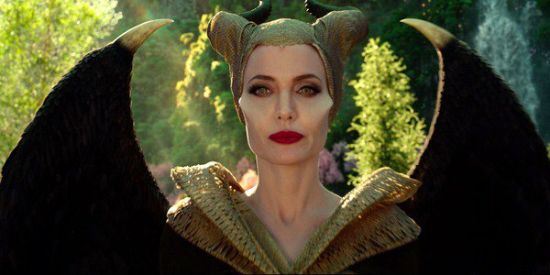 I was somewhat ambivalent about “Maleficient” from five years ago, liking the idea of the movie -- the villainess from “Sleeping Beauty” recast as a troubled protagonist -- more than the one they actually made. Certainly visually it was striking, with otherworldly beauty Angelina Jolie done up in horns, death-white flesh and strangely angular cheekbone prosthetics.

It made a boatload of money, so here’s another.

If I sound jaded, it’s because I am. But even though this sequel seems unnecessary and rather ham-handed at times, I found I enjoyed it more than the first one.

It has fewer pretensions about doing a truly dark and brooding movie while still retaining the family film label and PG rating. Jolie still gets to scowl and threaten as the winged witch of the north, though this time it’s played for laughs. At one point someone actually urges her to smile more, but not enough to show fangs.

The expectations society has for fairy demonesses these days! You must smile, but not too much, take a human lover but later kill him.

If you’ll recall the story from the first film, Maleficent is queen of the Moors, the shrouded land of fairies bordered (on all sides, it seems) but human kingdoms. Her human boyfriend betrayed her, cutting off her wings in order to secure the throne of his kingdom. For revenge Maleficent cursed his daughter, Aurora (Elle Fanning), though later grew close to her and even became her godmother.

Five years have passed, and now Aurora is set to wed her comely-but-disposable gentleman love, Prince Phillip (Harris Dickinson). This means Maleficent must meet his parents, King John (Robert Lindsay) and Queen Ingrith (Michelle Pfeiffer) of Ulstead, in a celebratory feast. And before you ask: Yes, the film milks the obvious “Guess Who’s Coming to Dinner?” joke.

It doesn’t take much thought to realize that John is a wise and peaceable king, while Ingrith harbors Cersei-ish inclinations. Before you can say “poisoned needle,” she has launched a war against the fairies, intending to wipe them all out in one go. It also seems she’s the one who has been spreading nasty rumors about Maleficent all these years so humans will fear her.

It’s basically high school, but with curses instead of gossipy texts.

The really interesting thing is that all though we had thought Maleficent was one of a kind, it turns out there’s a whole lost race of them. Called “dark fey,” they’re sort of a cross between feral hawks and indigenous natives, covering their bodies in paint or scars.

They’ve been exiled for centuries on an island that is apparently just a 90-second flight away from Maleficent’ s kingdom, which shows you how much of a homebody she is. Their leader is the benevolent Conall (Chiwetel Ejiofor) while the younger and hunk-ier Borra (Ed Skrein) calls for war.

It’s a bit strange that Ingrith has engineered the creation of an entire war machine of specialized weapons deadly against the fey, despite never having any knowledge that they existed. Warwick Davis crops up as her pet weapons master, experimenting upon captured fairies and using their most sacred flower, “tomb blooms,” in his dank dungeon laboratory.

There are plenty of action scenes, including lots of deaths, though fairies tend to just sort of “phsh” into clouds of dust or pollen rather than bleed out. There’s quite a menagerie of creatures, with my favorite being the giant tree golem creatures with woody skull faces and no eyes.

The “Maleficent” sequel a big, colorful, fun and not terribly plausible movie that weaves its silly spell well.