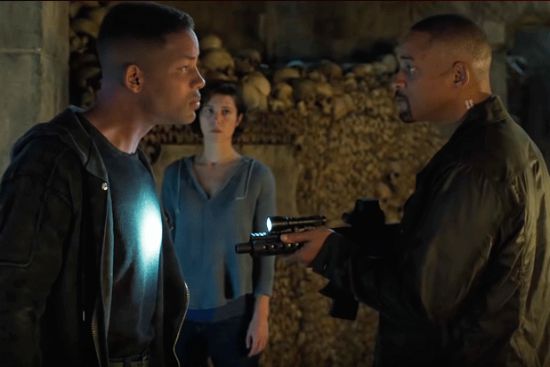 It’s one thing for a character to say they’re haunted by ghosts; it’s quite another to show the ghosts. “Gemini Man” does the former while scrimping on the latter.

I’ll be straight: I was prepared to duck the screening for “Gemini Man.” It’s a busy time of year and there’s a lot of movies to pay attention to. The trailers, in which Will Smith, playing a world-class assassin who encounters a younger CGI’d double of himself, looked pretty goofy.

Digital alteration of reality continues to advance, and we’ve all seen those freaky-deaky “deep fake” videos of Bill Hader transforming into Arnold Schwarzenegger or whatnot. But the truth is it still hasn’t gotten to the point where it’s totally convincing. So I was prepared to give “Gemini” a skip.

Then I saw the creative team: Ang Lee (“Crouching Tiger, Hidden Dragon”) directing? Two of the screenwriters are David Benioff (“Game of Thrones”) and Billy Ray (an Oscar nominee for “Captain Phillips”)? The credentials are there, maybe the film’s better than advertised?

It’s not a bad movie by any means. It’s got lots of vigorous action scenes, including a killer one where the two warriors battle on motorcycles, with the younger one using the bike itself as a weapon. There are also exotic international locales, a sniveling villain, and other hallmarks of the spy thriller genre. In terms of action set pieces, it’s basically a low-rent Bond film.

But that’s all it is. Lee and the screenwriters (Darren Lemke is the third) make aspirations toward something deeper and more meaningful, but keep falling back on stunts and shootouts instead of exploring the main characters’ inner psyches.

Smith plays Henry Brogan, a legendary sniper for the Defense Intelligence Agency. He’s spent 30 years making impossible kill shots, dubbed AMFs -- “Adios, Mother Flipper,” or thereabouts -- such as the one that opens the picture of a terrorist getting it through the window of a speeding European bullet train. Now after 72 confirmed kills he’s ready to hang it up, citing age, fading skills and the aforementioned ghosts.

Turns out the last kill wasn’t a clean one, but cooked up by old nemesis Clay Verris, played by Clive Owen in full jowls-and-scowls mode. He runs the titular Gemini program, a quasi-military force used by governments to clean up their messes. And they’ve concluded that Henry is the loose tie that needs to be snipped.

We’ve seen this before in every spy franchise, from Bond to Bourne to Jack Reacher. Someone in the government decides the veteran killer needs to be killed, racking up tremendous deaths and expenditure of resources in the process, necessitating even more stuff to throw at the guy.

At some point I’d like to see a movie where an armchair spymaster says, “You know what? Better just leave him be.”

Gemini’s secret weapon is Junior (also Smith), who was cloned from Henry’s DNA. The young man has spent his entire life being trained by Verris to be the ultimate killer. He’s got all of Henry’s moves plus a few parkour-style bits where he bounces off walls and such. But does he have the same hidden conscious eating away at him, suggesting all his jobs may not be on the up-and-up?

As I said, the likeness is not terrible, akin to Smith during his “Fresh Prince” days. He acted out the role normally and then a younger version of his face was digitally stitched on. It works OK in fleeting shots or darkness, but when the camera has to hold in bright light, it has a very video game feel.

Mary Elizabeth Winstead plays Danny, a DIA agent sent to tail Henry who ends up becoming his capable ally. She and Henry flirt in between the firefights, while pretending not to. Douglas Hodge and Benedict Wong are old friends brought in to help out.

The dialogue is truly cringe-worthy at times, with lines such as “It’s like watching the Hindenburg crash into the Titanic.” My personal (dis)favorite is Henry waking up Danny in bed and she pulls a pistol on him. “It’s not gun time, it’s coffee time,” he purrs, handing her a brimming mug. What the…?

I was expecting “Gemini Man” to be more a psychological thriller interspersed with action scenes about two hardcases with intertwined identities, a la “Face/Off.” But it’s just a straight-up action movie featuring Old Will Smith and digitally de-aged Will Smith.