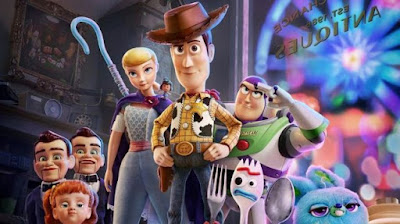 I enjoyed “Toy Story 4,” though I’m not terribly happy they made it.

That may sound strange, but here’s why: “Toy Story 3” was a very conscious end to the animated franchise. In it the child Andy, now all grown into a young man, gave away his toys to little Bonnie, and quite literally rode off into the sunset.

Cowboy Woody (voice of Tom Hanks), Buzz (Tim Allen) and the rest of the toys, who come to life when humans aren’t around, had completed their life’s journey and started anew.

Watching them come back for another romp that’s fun but hardly up to the standards of the other movies is like going to see a favorite singer who’s now aged and can’t hold the notes anymore. You enjoy being around him, but can’t help thinking it would’ve been better for everyone if he’d hung it up.

In this story the toy gang finds themselves in a remote mountain village, where Gabby Gabby (Christina Hendricks) is the evil/warped toy du jour. She’s of roughly the same vintage as Woody, and resents that she never got a child of her own.

The big twist is the return of Bo Peep (Annie Potts), Woody’s former girlfriend who disappeared long ago. She’s now a free-living, adventure-seeking “lost toy” who embraces her independence.

As I said, I doubt anyone who likes these movies will fail to be entertained by “Toy Story 4.” But let’s put it this way: I had to look up my review of the movie from just three months ago, because the story and details had already faded from my memory.

That never happened with the other “Toy Story” movies. They stick in the mind and the heart.

Digital-only material includes one additional deleted scene and another featurette, “Anatomy of a Scene: Prologue.”