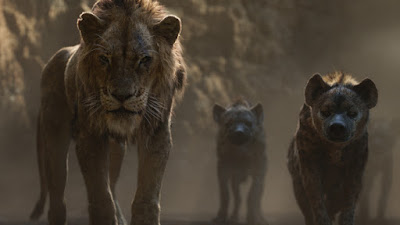 Disney’s obsession with remakes shows no signs of slowing, even with the occasional stumbles like “Dumbo.” “The Lion King” made more than a billion dollars at the box office, despite adding nothing to the legacy of one of animation’s most iconic achievements.

When “The Lion King” came out in 1994, animation was in the midst of a revitalization after having been in the doldrums for three decades. And here was this big, epic story with Shakespearean notes about a murdered king and his exiled son.

Except it was a cartoon with animals and pop music songs.

Turning it into a live-action movie, with few minor changes in the story and even the same musical numbers, seems like an exercise in artistic futility. I’d rather just watch the original again and be done. The studio actually released a 3-D version of it a few years back to milk some more dollars out of it.

It’s a beautiful-looking picture, directed by Jon Favreau from a screenplay by Jeff Nathanson. It just doesn’t have any reason to exist.

Oddly, even though nearly the entire voice acting cast is still around, only James Earle Jones was allowed to return with his basso profundo growl as King Mufasa. Notable new players include Donald Glover as Simba, Beyoncé as Nala, John Oliver as Zazu, Chiwetel Ejiofor as Scar, Seth Rogen as Pumbaa and Billy Eichner as Timon.

You know the story: young Simba the lion is set to inherit the throne from his father, but when dad is killed by his nefarious uncle, he runs away to live a carefree life with some new buddies he stumbles upon. Eventually circumstances, and the romantic pull of running into his childhood friend, entice him to return and try to reclaim his birthright.

The experience of watching this remake after the original is like seeing a new play on Broadway that goes on to win a raft of Tony awards and has seismic reverberations in the industry, and then years later seeing it again on the stage at the Peoria civic theater with the roles reprised by local school teachers and CPAs.

Even when it’s well done, it’s merely an echo of something great from long ago.

Bonus features are expansive and sumptuous. They start with a feature-length audio commentary track by Favreau’ seven “song selections” of key musical pieces two music videos by Beyoncé and Elton John for their two new songs; animation progression sequences showing how four key scenes were built in layers; three making-of documentary shorts: “The Music,” “The Magic” and “The Timeless Tale;” plus “Project the Pride,” and about conservationist efforts the studio undertook to help protect African lions.