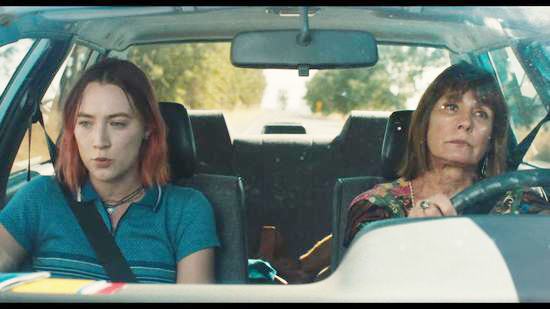 Certainly, they don’t usually feature actual teens, preferring actors in their mid-20s and up. Instead of being themselves, movie teens act as vessels for adult filmmakers and audiences to work out their hang-ups, or idolize their youth.

Awkwardness and acne? The realities of teendom get kicked to the curb in favor of gleeful hookups and glowing skin.

“Lady Bird,” the first directorial effort from Greta Gerwig, is the exceptional exception: it is thoroughly of, about and for teens. Here is one of the best films of the year.

It stars Saoirse Ronan in a quasi-autobiographical take on Gergwig’s own upbringing in Sacramento, Calif., focusing on the title character’s senior year at (fictional) Xavier Catholic High School. Gerwig also penned the screenplay.

Christine McPherson is struggling to find an identity, to carve out a place in the world of her own making. She’s desperate to get into a good East Coast college, land a boyfriend and lose her virginity, and most of all to get away from her critical, overbearing mother. She even gives herself an alternate name, Lady Bird, mostly as a reason to cast off her mom’s insistence on defining her.

This movie is about a lot of things, but Lady Bird’s relationship to her mom is at the heart of all. Gerwig, known for playing complex, challenging female characters onscreen, gives us two magnificent ones -- brave, flawed, with oversized personalities and shrunken appreciation for each other.

Yet there is a fierce love at the bedrock. Constantly harping about her mother, Lady Bird nonetheless rushes to defend her as having a “huge heart” when anyone echoes her criticism.

Laurie Metcalf plays the mother, in a three-dimensional performance of such ferocious trueness it will be a scandal if her name doesn’t come up during the awards cycle. We can sense the mistakes her own mother made with her, and see how she struggles to avoid them while demanding her daughter set high goals for herself.

“I just wished you liked me,” Lady Bird says to her mom, both accusing and pleading.

The film is also unexpectedly realistic in how it approaches themes rarely broached with anything resembling sensitivity in mainstream filmmaking: money and faith.

Lady Bird’s family is working class, living (literally) across the tracks from the tonier parts of Sacramento, buying clothes in thrift stores and eschewing luxuries to afford to send Lady Bird to a private school. Almost every line of dialogue her mom utters in the movie is tied to finances in some way.

Her dad (Tracy Letts) has his own struggles, including losing his job, but works mightily to keep them from affecting his relationships with his family. He tries to support both Lady Bird and his wife in their contest with each other, always offering his own quiet, unconditional love.

Lady Bird’s approach to her Catholic upbringing is somewhat rebellious, but also grounded in a sense of being home. The priests and nuns who run the place (notably Stephen Henderson and Lois Smith) impose the old rule on “leaving six inches for the Lord” between couples at dances, but also encourage their students to think and explore.

Set in 2002-03, the story has 9/11 and the invasion of Iraq firmly in the background, as Lady Bird trips through the normal watershed moments of her senior year: holidays, prom, college applications, etc. She yearns for, and then lands, the dreamy boy in theater class, Danny (Lucas Hedges). Though she finds it a little odd she has to play offense rather than defense when it comes to physical intimacy.

Her long friendship with smiling, shy Julie (a terrific Beanie Feldstein) is tested as their paths invariably diverge. Lady Bird takes up with a new pal, Jenna (Odeya Rush), the seemingly perfect rich girl she had previously mocked-while-envying. She acquires another love interest (Timothée Chalamet), who’s trying on radicalism as a fashion statement.

We see that Lady Bird’s primary weakness is her willingness to adapt her outward self to other people and circumstances. She embraces the theater scene, until she doesn’t. She smokes clove cigarettes because that’s what her friends do. She lies about who she is, in order to placate what she thinks are the expectations of others.

It’s an amazing turn by Ronan, who continues to cement her reputation as one of the finest actresses of her young generation. Though 23, she ably passes for 17, even showcasing her character’s acne-scarred cheeks and often inept sense of fashion.

“Lady Bird” is a portrait of a profound soul emerging from the cocoon of youth to regard the world with fear, resentment and awe. This is a film that knows one of the hallmarks of being a teenager is that we don’t yet know very much, but that which we do hold we grip onto with frightening strength.