Review: "Murder on the Orient Express" 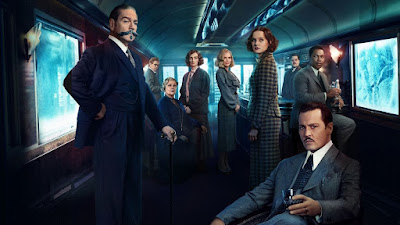 The remake of “Murder on the Orient Express” starts slow, chuffing away and spinning its wheels with little forward movement, but gradually builds a head of steam. It propels us through the usual twists and turns of a classic whodunit, as a dozen suspects are queried and sorted in the search for a killer.

By the end of the film, it has completely transcended the murder/mystery genre and become an emotionally affecting treatise on right and wrong, evil deeds and revenge.

(I assure you I mean to: it’s currently sitting in my Netflix DVD queue. Yes, some of us still pay for the shiny disc plan.)

Kenneth Branagh directs and stars as the famous Belgian detective Hercule Poirot -- everybody wants to call him “Hercules” -- an ostentatiously mustachioed gentleman whose courtly demeanor hides a mind as troubled as it is brilliant.

Poirot is vexed by “imbalance” -- whether it be a tie knotted askew, two boiled eggs for breakfast that are not the same size or a plot to take another human life. People wonder at his marvelous deductions, but as he explains to an admirer, when things are not perfectly aligned it stands out to him as plain as the nose on your face.

Even if, like me, you are innocent of the book and other movie, you probably know the basic plot: Poirot is plopped onto a train full of colorful characters, and one of them turns up gruesomely dead. Trapped by an avalanche that has derailed the locomotive, they stew together as the masterful investigator sifts through the evidence, which includes a torrent of lies and misdirection.

Michael Green provides the screenplay, which near as I can figure follows the book and other film pretty closely. The ethnicities and vocations of a few of the characters are shifted around, but the basic dynamics remain the same.

This is billed as one of those classic “all-star casts” -- though, truth be told, it’s more like half a cast of stars, most of them faded, a quarter recognizable character actors and a quarter you’ve never heard of.

Johnny Depp is the biggest name, playing a slimy, scarred American businessman named Ratchett. Michelle Pfeiffer turns up as Caroline Hubbard, an often-divorced woman apparently looking for her next sugar daddy, and Poirot is her prime candidate. Josh Gad is Hector MacQueen, Ratchett’s resentful secretary, and his manservant, Masterman, is played by Derek Jacobi.

Judi Dench, alas, is given little to do as a snooty displaced Russian princess, though Daisy Ridley delights and surprises as Mary Debenham, a smart and resourceful governess. Lucy Boynton and Sergei Polunin are addled dancers/diplomats/royalty.

It’s a sumptuous movie of gorgeous costumes and exquisite settings. The Orient Express is not some railway for bumpkins, but a four-star hotel for the rich on wheels. Somehow even after the train engine is stopped, there’s still plenty of heat and five-course meals.

I’ll admit the turnabouts of the plot started to grow a little tiresome for me -- “It’s him! No, it’s her!” -- but the movie really starts to gel just past the midway point. Poirot is basically a human Google: he knows everything about everyone, everywhere.

I wouldn’t think to give any hints about the ending, other than to see it’s a humdinger. Forty years after it was a movie, and 40 more for the book, “Murder on the Orient Express” still has surprises aplenty.