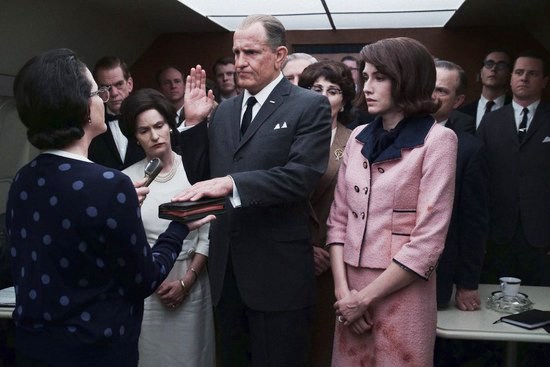 Rob Reiner is the last guy you’d expect to draw a sympathetic portrait of Lyndon Baines Johnson, the 36th President of the United States who, more than anyone, was responsible for America’s tragic involvement in Vietnam. A politically outspoken filmmaker his entire career, Reiner demonstrated against the war and, by his own admission, loathed the man who threatened to send young men like him there to fight and die for a lost cause.

But “LBJ” does indeed take a kindly, or at least balanced, look at the president who was the ultimate mix of the highest nobility and the crassest venality. In the film, he’s the sort of man who would berate subordinates while squatting on the toilet in full view, then valiantly twist the arms of like-minded Southern politicians to pass landmark civil rights legislation.

The story (screenplay by Joey Hartstone) takes place during the assassination of President John F. Kennedy and the days afterward, with flashbacks to Johnson’s failed 1960 bid for the Democratic nomination, recruitment as vice president and subsequent dissatisfaction with his subservient role.

Though Reiner and Hartstone map out some of the relationship between Johnson and JFK (Jeffrey Donovan), and between LBJ and his wife, Lady Bird (Jennifer Jason Leigh), the real dynamic at the center of the tale is Johnson’s antagonism with Bobby Kennedy (Michael Stahl-David). RFK sees the scrappy Southern politician as an irksome emblem of the racist past, useful for securing the Texas vote and nothing else.

Johnson, for his part, seems genuinely mystified at having his vast experience in the corridors of Congress cast aside so he can preside over useless committees that serve mostly to keep him away from the limelight.

It’s a revelatory performance by Woody Harrelson as LBJ. At first it might seem a bizarre casting choice, given Harrelson’s colorful history of kooky and comedic roles. After seeing the film, though, it’s hard to imagine any other actor in the role.

Prosthetics help somewhat with drawing the resemblance closer, with Harrelson outfitted with Johnson’s horseshoe hairline, jowls and droopy basset hound ears. He’s got the corn-pone speech pattern down to a T, and the jangly body language of a man who projects bravado but is never quite comfortable in his own skin.

We get a few get examples of “The Treatment,” LBJ’s infamous in-your-face style of negotiating that could include browbeating, charm and begging -- sometimes within the space of a few sentences. The chief target is Sen. Richard Russell (Richard Jenkins), a Senate ally of Johnson’s from Georgia who (incorrectly) assumed the ascension of another Old South politician to the White House meant the indefinite enduring of Jim Crow.

The movie doesn’t get into Vietnam at all, other than a couple of brief mentions during the movie and some sobering end titles.

“LBJ” has had a troubled birthing. The screenplay languished on the “Black List,” an annual catalogue of the best unproduced scripts. Reiner shot the film in 2015, and it debuted at the Toronto Film Festival over a year ago before finally picking up a tiny distributor.

Perhaps the most surprising thing about the movie is how funny it is. LBJ was a king of the one-liner, and just as often said things that were hilarious without his intending so. “Never underestimate the intensity of martyr’s cause, or the size of a Texan’s balls,” he says.

The film is at times a bit too sentimental, occasionally dipping a toe into sappy. (The musical score by Marc Shaiman doesn't help, laying on the syrupy strings.) Perhaps in trying to do justice to one of the most reviled men of his day, the filmmakers tipped a little too far in the other direction.

But “LBJ” is still well worth a look for Harrelson’s peppy and affecting performance.