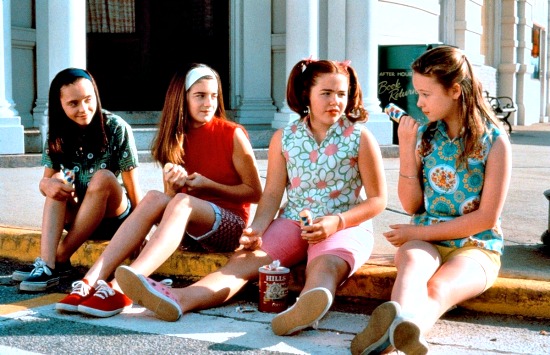 Pretty much forgotten today, "Now and Then" was dismissed at the time as a brazen ripoff of "Stand By Me" with girls swapped out for boys. That criticism is legitimate but doesn't completely define this good-hearted coming-of-age story, directed by Lesli Linka Glatter from an original(ish) script by I. Marlene King, two celebrated television creators who continue to work today.

The premise holds promise: gather four well-known adult actresses -- Melanie Griffith, Rosie O'Donnell, Rita Wilson and Demi Moore -- and pair them with four young counterparts to play the same characters at age 12. It doesn't quite hold water, though, as the youngsters carry the movie and the famous stars only turn up for brief bits to bookend the beginning and end.

The film is notable if only because most of the young actresses have gone on to significant careers as adults: Christina Ricci, Thora Birch and Gaby Hoffman. Ashleigh Aston Moore gave up acting a couple of years later, and died quite young a decade hence.

Their characters do line up uncomfortably close to the general personas of the boys from "Stand By Me." Hoffman is Samantha, the pensive writer with troubles on the home front who also narrates. Roberta (Ricci) is the troublesome, surly kid who gets into a lot of fights. Tina aka Teeny (Birch) is the one destined to break out of their cloistered small town and pursue greatness, in her case becoming a big movie star. Moore plays Chrissy, the "fat kid" (barely chubby by today's standards) who's not terribly bright and ends up being the butt of a lot of the jokes.

(Young Moore reportedly was required to gain 20 pounds for her role, which seems clueless at best and downright abusive in less kind lights.)

The idea is the girls make a pact in 1970 to always be there for each other -- "All for one, and one for all" is their borrowed mantra -- which brings them back together two decades later when Chrissy is pregnant, the first child for any of them. The film is set in Shelby, Indiana, though it was mostly shot in Georgia.

As with "Stand By Me," the quest that bonds them is the death of a young boy. Rather than a fresh body by the railroad tracks, though, it involves a gruesome murder of the kid and his mother decades earlier. While performing a seance in the local graveyard, Samantha thinks she's woken the spirit of "Dear Johnny," evidenced by his gravestone turning up broken, and they set off to solve the mystery.

Their antagonists are the Wormers, a foursome of grody brothers who like to play pranks on the girls, and vice-versa. This culminates with our heroines spying on the boys skinny-dipping and stealing their clothes, which results in a plethora of preteen nudity that tests the limits of the PG-13 rating. The oldest Wormer (Devon Sawa) secretly pines for tough Roberta, and they share a kiss... after she trounces him at some 1-on-1 basketball.

The supporting cast is broad and colorful. I really enjoyed Cloris Leachman as Samantha's frenzied grandmother, who takes on more of a role when her father walks out on her mother (Lolita Davidovich). Grandma takes pains to hide the details of Dear Johnny's story, and hustles off to bingo games with such enthusiasm we suspect it's a cover for some other activity.

Hank Azaria turns up as a smarmy candidate for the role of Samantha's stepdad; Bonnie Hunt is Chrissy's mom, passing on her fussy manners and tragically inaccurate information about sex; Rumer Willis has a bit role as Samantha's kid sister; Brendan Fraser plays a burnt-out Vietnam vet who shares cigarettes and a little hard truth with the girls; and Janeane Garofalo plays Wiladene, the town's resident creepy woman who's a diner waitress by day and a moonlights as a psychic-for-pay.

Walter Sparrow has a small but pivotal role as Crazy Pete, the ubiquitous scary old coot with a backstory that will flesh him out in the end.

The modern part of the story is too thin to have any real weight. Chrissy has turned into a prissy fussbudget just like her mom, her home a parade of doilies and reeking of excessive hairspray. Roberta became a doctor, though she doesn't seem very happy about it, or anything. Even during the warm-and-glowy scenes at the end, O'Donnell remains determinedly grim-faced for some reason.

Samantha has become a successful paranormal writer who can't commit to a relationship, wearing men's suits and an air of superiority. Teeny has already been married and divorced three times, and seems to thrive on any kind of attention she can get.

The movie has a clear television feel to it, although the production values are pretty decent. It suffers mostly from a sense of predictability, not to mention a "Wonder Years" type of hazy nostalgia that could use a few more rough edges. Even Samantha's frustration over her parents divorcing feels ephemeral and insubstantial.

To be honest, I'm not even sure how I came to include "Now and Then" in my look-back movie column. As I've mentioned in previous entries, I keep a voluminous list of flicks between my queues for Netflix DVD and streaming, Amazon Prime, stuff I've DVR'd -- mostly from Turner Classic Movies -- and new video releases of old films. The total generally hovers around 100 films, so it might be two or three years between selecting something to add and getting around to seeing it.

Possibly it was the Indiana setting, or the actresses involved, or the fact I once penned a newspaper column called "Now & Then," though that was in reference to the fact it ran only when I had space or time for it.

I at first struggled to get through the movie. The first half-hour or so rather clunky and borderline amateurish. But I warmed to the material as it went on, and ended up with the appropriately fuzzy/wistful feelings the filmmakers no doubt were hoping for.

This exercise has been a helpful reminder that, although Hollywood doesn't pump out the sheer number of movies it did during the Golden Age, the ratio of what stands out in memory and what doesn't has remained about the same. "Now and Then" may be a forgotten film, but it isn't forgettable.