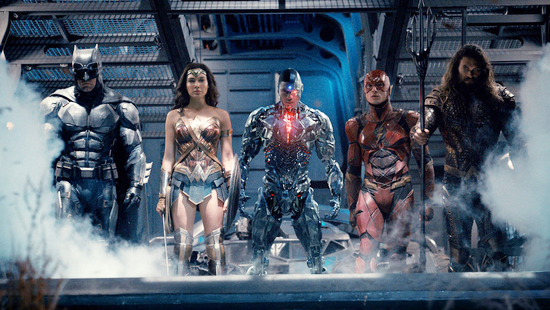 All is forgiven for "Batman v Superman: The Dawn of Justice." The DC Comics supergroup franchise that seems like it's been teased for an eternity finally arrives with a peal of thunder.

"Justice League" is a huge, sprawling, action-packed film that also finds time to let each of the characters show a little of their heart. I know the fanboys may want wall-to-wall combat, but it's just meaningless fireworks unless we grasp what the stakes are. Director Zack Snyder and screenwriters Joss Whedon and Chris Terrio manage to find time for everything a good superhero film needs, and keep it just under two hours to boot.

Yes, it's a little goofy. Occasionally over-the-top so. Comic book movies have taken a decided turn toward comedy in recent years, and there's no putting that toothpaste back in the tube. Most of it is centered around the Flash (Ezra Miller), the self-designated comedic relief. Every team needs a cutup, I guess. Miller accepts the role with enthusiasm and aplomb.

My only really major complaint with the movie is that the villain isn't terribly memorable. He's a pretty generic big ol' axe-swinging dude promising to bring about the end of the world named Steppenwolf -- and no, it's not terribly imposing to have a bad guy named after a middling Canadian rock band. Portrayed by Cirian Hinds via motion capture with an oversized horn helmet, he looks like he could have stepped right out of the most recent Thor movie without skipping a beat.

And OK, I'm not too keen on the latest iteration of Aquaman, played by Jason Momoa. And not just because yet another blond superhero has been turned brunette for the movies. (Though Momoa at least has now-you-see-em, now-you-don't highlights.) He's portrayed as a surly, tatted-up dude who likes to blow into fishing towns to gargle whiskey in between saving lives. He's like a benevolent biker meets Caine from "Kung Fu."

When "BvS" left off, Superman (Henry Cavill) had died battling Lex Luthor's monstrous creation, leaving the world without hope. Batman/Bruce Wayne (Ben Affleck) is still brooding, but he's committed to the idea of putting together a group of meta-humans to head off looming threats. Strange bug-like flying men have taken to popping up here and there, attracted by the smell of fear.

His only recruit thus far is Wonder Woman (Gal Gadot), who he sees as the logical replacement for Superman's beacon of virtue. But she's hesitant to take up that mantle, for reasons we saw in her solo movie earlier this year.

Wayne's other targets are Aquaman, Flash and Cyborg. Flash's only power is the ability to run crazy fast, and also generate electrical impulses while doing so. As he himself says, he's no warrior: "I've just pushed people and run away." His super-speed sequences are depicted in slo-mo, much like they did with Quicksilver in the "X-Men" movies, and there's one great scene where Flash gets a surprise of his own.

Cyborg (Ray Fisher) is your classic man/machine hybrid, who doesn't understand the full of extent of his expanding powers and sometimes even struggles to control them.

The team also gets a late, unexpected addition to the roster in time for the third act, but I'll say no more.

The plot is the usual gobbledygook about cosmic doohickeys being rediscovered and fitted together somehow to create end times. In this case, three square Mother Stones that were hidden away eons ago to prevent them from being combined to create the Unity.

(It's disturbing how weapons of cosmic destruction are always given such soothing names in the movies. How about the Hellacious Doom-Bringer?)

The action is frenetic and sometimes a little hard to follow. It's interesting to watch the different fighting styles of the heroes. Batman is all about intricate moves and outsmarting your opponents -- a necessity as he's the only league member lacking super-powers -- while Wonder Woman is a straight-on badass warrior who uses her sword, shield and magical rope, which forces people to reveal the truth.

Aquaman does more than just speak to fishies, wielding a trident and his own measure of super-strength. Cyborg's body is basically one big Iron Man suit, with a new gadget to pull out for every situation.

"Justice League" isn't nearly as good as the first Avengers movie, but it delivers a DC team flick that's undeniably entertaining. After the letdowns of "Man of Steel" and "BvS" -- and let's not even talk about that Green Lantern disaster -- the "other" comic book empire has finally put solid wood on the ball.

Post-script: Stick around during the credits for a couple of neat bonus scenes. The first recreates one of my favorite comic book events from my childhood, while the second demonstrates how out-of-touch I am with the modern comics scene.

Posted by Christopher Lloyd at 10:00 AM