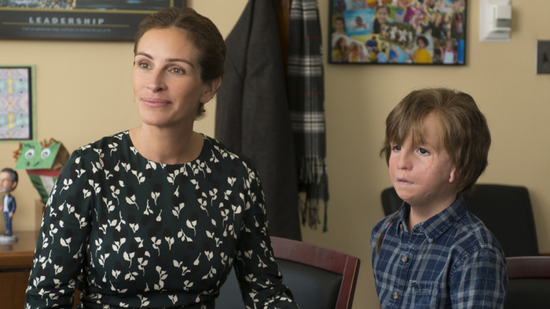 "Wonder" is an old-fashioned, straight up weepie. Tears will be jerked, you can be sure. I liked the fact that the movie is unambiguous about its intentions, and carries them through effectively without irony or coyness.

Jacob Tremblay, who was so amazing in "Room," plays Auggie Pullman, a boy of 10 born with severe facial defects. He's been through 27 surgeries -- his family displays the hospital wristbands as a collage -- and has been home-schooled all his life by his ferocious devoted mom, played by Julia Roberts. Now, as he enters 5th grade, it has been decided it's time for him to integrate into a regular school with other kids.

Well, sort of. In Hollywood parlance, a "regular school" is an exclusive New York City private institution, Beecher Prep, where families that live in multi-million-dollar brownstones pay something like the U.S. median household income to send their kids to rub elbows with the best of the best. But for the purposes of the story, which is based on the best-selling by R.J. Palacio, what's important is that he's around other children consistently for the first time in his life.

The underlying themes of the movie are bullying and otherness. Mom and dad (Owen Wilson) send Auggie to school with the full knowledge that he will be stared at and picked on. They figure it's something he's going to have to deal with sooner or later, and calculate he's reached a level of emotional stability to deal with it.

Also, there's a subplot about the mom wanting to complete her master's thesis that was put on hold a decade ago to be his full-time guardian and tutor. And, frankly, she rightly wants to reclaim a little piece of her own life. I admired that the filmmakers -- director Stephen Chbosky, who co-wrote the script with Steve Conrad and Jack Thorne -- included this dynamic.

I know it runs counter to commonly accepted precepts and hagiography about mothers, but I personally think it's unhealthy for parents to let their kids think they have nothing going in their lives beyond raising them. Part of being a role model is not being afraid to display ambition and individuality.

The makeup effects on Tremblay are very good, to the point I didn't recognize him until I read the credits afterward. Auggie is a smart, sensitive kid who likes science and Minecraft, and has adapted pretty well to life inside his family unit. He tends to wear an oversized astronaut's helmet in public to avoid stares; it's his armor, really. So he has a tough time when his parents ask him to relinquish it.

Auggie does face teasing and isolation, but also picks up a friend in Jack Will (Noah Jupe), a poor scholarship kid with a nice streak. The joy on mom's face when he brings home a pal to play is worth the price of admission alone. Still, old troubles soon follow and Auggie finds himself estranged again.

He's got an older teen sister, Via (Izabela Vidovic), and I was impressed the film devotes a significant amount of screen time following her life and seeing how it's impacted by having a brother who soaks up every ounce of attention from their parents. She's quiet and shy, and dealing with an unexpected fallout with her own best friend, Miranda (Danielle Rose Russell).

She starts to blossom when she joins the school theater club, and meets a cute, funny boy named Justin (Nadji Jeter) who takes a fancy to her.

I also greatly enjoyed Mandy Patinkin as Mr. Tushman, the headmaster of the school who understands the way kids actually think and behave, rather than the idealized regard in which their parents hold them. He is infinitely patient and kind, makes jokes about his name before the students have a chance to, and even manages to treat the bullies in a way that lets them know they are not irredeemable. He's basically the Santa Claus of educators.

"Wonder" plays out exactly the way we expect. Given the premise, we could practically write the ending ourselves. But it's still a touching movie that celebrates the weak and the meek, and shows there different kinds of strength.

Posted by Christopher Lloyd at 11:40 AM