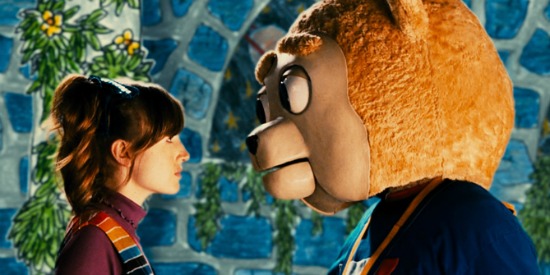 Since I only feature one video a week in this column, I often struggle with which films to write about. Do I stick to just the big box office hits? Or try to showcase something smaller and quirkier?

In truth, it’s probably wiser to concentrate on the high-profile movies since more people are interested in them. But in this age of exploding content, I think it’s a critic’s highest duty to point people in the direction of worthy films that they haven’t heard about.

“Brigsby Bear” is one of my favorite films of 2017. Barring a rush of tremendous awards hopefuls in the last couple of months, it will almost certainly make my Top 10 list. It’s a weird, wonderful flick that is as emotionally engaging as it is hard to describe.

But I’ll try my best.

Kyle Mooney, who also co-wrote the script with Kevin Costello, plays James, an isolated, meek man of about 30 who still lives very much in a childlike state. He has spent most of his life living in a desert bunker with his parents (Mark Hamill is terrific as the dad) after an apparent post-apocalyptic tragedy.

At least a little bit of society is still functioning somewhere, as evidenced by the one television show still producing new episodes on a weekly basis. James has been following “Brigsby Bear” with religious devotion since he was a child -- it’s his whole world, really. It’s a cheap educational program that involves a superhero bear battling an evil villain named Sunsnatcher with the help of some special friends.

Without giving anything away, James eventually moves beyond his simple life to a much wider community. Much to his chagrin, nobody else seems to have ever heard of Brigsby. So he takes it upon himself to show them the magic of how that experience has affected him – including donning the Brigsby oversized head and making new episodes himself.

Ostensibly a comedy, “Brigsby Bear” is really a story of people who have every reason to stand apart coming together in a way that binds them and brings joy. It’s a peculiar, beautiful film that showcases the boundless capabilities of cinema.

Video extras are rather good for such a small release, and the DVD version comes with a good stock of offerings.

They include a feature-length commentary track with Mooney and director Dave McCary, a “Twin Speak” featurette with the same pair, a gag real, Q&A with the cast and “The Wisdom of Brigsby Bear” feature.

Upgrade to the Blu-ray edition and you add deleted and extended scenes and “Brigsby Bear: The Lost Episode! Volume 23 Episode 14: The Festival of Kindness.”