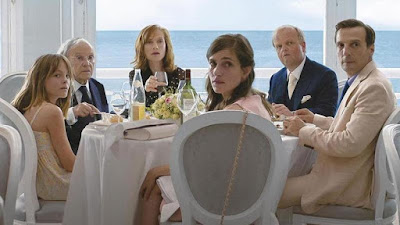 “Hi, we’re French and rich and awful, come spend two hours with us.”


That was my cheeky micro-review of "Happy End," the French drama starring Isabelle Huppert as the matriarch of a wealthy family of horrible people. I'm not really sure what master director/writer Michael Haneke ("Amour") was going for here. There doesn't seem to be any kind of coherent theme, other than everyone in the Laurent family is somehow damaged, spiteful and/or emotionally stunted.

Huppert's character heads up the large construction company that brings them their riches. Her wayward son, the heir apparent, is a drunk who doesn't want to work. Her brother is divorced and carrying on a sadomasochism-tinged affair behind the back of his new wife, while his daughter takes dangerous steps to catch his attention, including poisoning her own mother. The father is suffering from dementia and wants to die.

Meanwhile, an accident at a construction site results in a serious injury that threatens to bring their empire down.

"Happy End" is a near-torturous meditation on hate, estrangement and suicide. After watching it, I finally identified with the family.

Posted by Christopher Lloyd at 3:25 PM