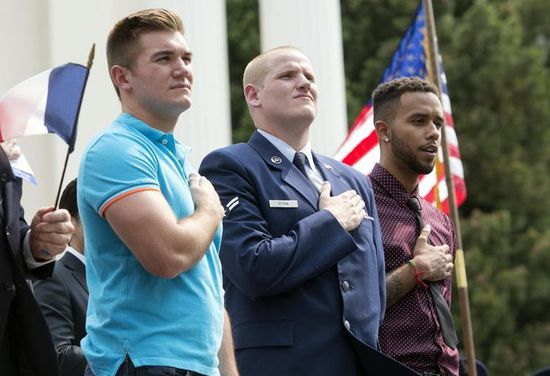 You can appreciate a bold choice while still recognizing that it was the wrong one.

Such is the case with Clint Eastwood's "The 15:17 to Paris," a drama about a 2015 terrorist attack on a train that was thwarted by three young Americans, two of them military service members. After initially casting three actors to play the heroes, Eastwood did a sudden about-face and decided to use the actual men in the movie, recreating not only the attack but their journeys -- figurative and otherwise -- leading up to it.

Acting is one of those things people think anybody can do, until they try to do it. Spencer Stone, Anthony Sadler and Alek Skarlatos are obviously fine young men, but it's often painful watching the movie and wading through their blank expressions, flat line delivery and emotional vacancy. Stone is the best of the bunch, which is to say he's ready for a walk-on role in a community college play.

How hard can it be to play yourself? Pretty difficult in a feature film, what with all the lights and equipment, long delays between setups and logistics of hitting your mark, etc. And of course, it's natural to want to behave like an idealized version of yourself, rather than the flawed, authentic person we all are.

The movie could survive the leaden performances -- the events are certainly compelling enough -- but mistake #2 proves even more fatal. In basing the story on the book the three men wrote (along with Jeff Stern), the film explores not just the events of that fateful day, but everything leading up to it: their childhood friendship, struggles to find purpose after high school, early military careers, etc.

On the surface, it seems like a logical move. Eastwood and screenwriter Dorothy Blyskal can't center an entire movie around an encounter that lasted a few minutes. And we have to get to know these three fellows in order to be invested in their story.

But the prologue ends up consuming two-thirds of the movie, which even at a scant 97 minutes often drags badly.

The deadliest stretch chronicles their trip across Europe prior to the fateful train ride, which has all the narrative cohesion of YouTube footage of a real twentysomething's unedited travelogue. They go to a pub in Germany, nightclub dancing in Amsterdam, eat at a riverside Venice cafe, make copious use of the selfie stick, etc. All the while, chatting amiably and aimlessly about where they should go and what they should do next.

Skarlatos, who joined the Army and was on leave from Afghanistan at the time, comes across as earnest and a little dizzy. Sadler is the charmer of the group, who as a kid got in trouble at their Christian school for spewing expletives at the teachers. Stone is a bit of a big doofus, kind and outgoing and a bit of a screw-up as an Air Force airman, washing out of school to be that branch's version of a medic.

Jenna Fischer and Judy Greer are more or less wasted as the single mothers of Skarlatos and Stone, respectively, showing for a few clashes with the awful school principal (Thomas Lennon) and then for the medal awarding ceremony at the end.

The movie finally hits its stride in the last half-hour. After brief flashes of the incident during the interminable wind-up, we see how the encounter with the terrorist (Ray Corasani) played out, in all its bizarre and bloody mayhem. The man had an AK-47, a pistol, blades and hundreds of rounds of ammunition. Dozens, if not hundreds would almost surely have been killed.

After overcoming and shooting another man who initially tried to stop him, the attacker was tackled by Stone and beaten to submission by the trio. It all plays out in the confined space of a train cabin, and in those few moments Eastwood reminds us of his magnificent ability as a director to depict violence while contemplating the repercussions of it.

Alas, I can't recommend one-third of a good movie. "The 15:17 to Paris" mostly goes to show that often the best way to enshrine history is to fake it... and leaving the boring parts out.

Posted by Christopher Lloyd at 12:27 PM