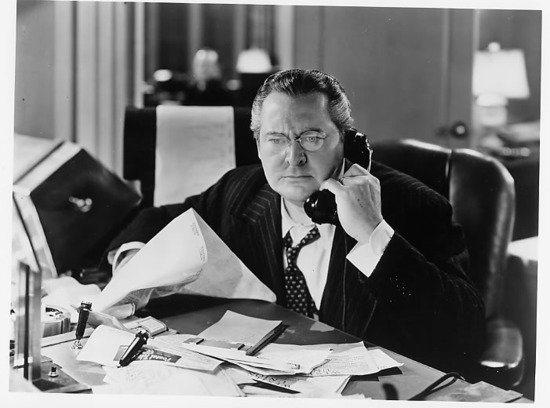 One of the recurring themes of 1930s American movies was that rich people were awful while regular folks were celebrated as salts of the earth. It made sense to appeal to the masses during the Great Depression. Of course, these pictures were made by millionaire directors and millionaire stars working for multimillionaire studio heads, so I always try to take the egalitarian sentiment with a pound or two of salt.

"You Can't Take It With You" was the first movie Frank Capra made after a spat with Columbia Pictures that resulted in lawsuits and months of forced idleness. So it's not hard to see the greedy tycoon of the piece, Anthony P. Kirby, as a stand-in for notoriously hard-hearted Columbia mogul Harry Cohn. Screenwriter Robert Riskin adapted it from the popular play of the same name by George Kaufman and Moss Hart.

Kirby is played by Edward Arnold, a former leading man who wandered into supporting character territory as he grew older and stouter. It's an ensemble piece with no true main character, although the closest is Lionel Barrymore as "Grandpa" Vanderhof, an eccentric old coot who oversees a motley houseful of family members and drop-in visitors.

Vanderhof used to be a prospering businessman himself, but decided one day 35 years ago that he "wasn't having fun," and hasn't worked a day since. Everybody living in the house does whatever they like best, from dancing to playing xylophone to writing plays to making toys. It's a little unclear how the family hasn't fallen into indigence, as their sole income appears to be selling little candies.

Kirby wants to buy the Vanderhof house to complete the biggest deal of his career, which will make his company the largest arms dealer in the U.S. Somehow, not owning one small piece of property in a New York City neighborhood near the factory of his chief competitor will foil the entire plan.

Meanwhile, Kirby's son, Tony Jr. (James Stewart), and Vanderhof's granddaughter, Alice (Jean Arthur), have fallen in love and want to get married. Alice works for Tony at his father's company, where he's a vice president with an office and not much to do. So basically, he's macking on his secretary. Of course, nobody initially realizes that the patriarchs of their two clans are at odds.

For me, Kirby Sr. is the only truly interesting character in the movie. He's the only one that undergoes any kind of significant change over the course of the story's arc. Other people make decisions that change their status -- Tony Jr. winds up quitting his dad's company to pursue what today we would all solar power -- but they wind up the same people at the end of the movie as they were when it started.

The elder Kirby, on the other hand, is the one who sees the light. Grandpa Vanderhof plies him with his philosophy, which is that a man who has many friends is always rich, while one who pursues only power and wealth is inevitably poor. After being publicly embarrassed and watching his son walk out on him, Kirby has a change of heart and nixes the deal just as it's about to be signed.

Incidentally, the injury to Vanderhof's foot that requires him to use crutches the entire movie was not in the play. It was written into the script to assist Barrymore, whose arthritis had gotten so bad that he was turning down roles for which he was not sufficiently ambulatory. Though he could stand upright for short periods, Barrymore would use a wheelchair the rest of his life -- a state much similar to FDR, whom Barrymore loathed.

"You Can't Take It With You" is a lesser film in the Capra canon imho, but it was very well-received at the time. It was the top-grossing movie of 1938, was nominated for seven Oscars and won two, including Best Picture. Capra also picked up his third directing statue in the space of just four years.

Spring Byington was the only cast member to receive an Academy Award nomination, playing Alice's mother, Penny, who pours herself into creative endeavors as they strike her fancy. Once she was a very avid painter, but then a typewriter was delivered to the house by accident, and she's been cranking out plays -- every one of them unproduced, as near as we can tell -- ever since.

Mischa Auer plays a stentorian Russian, Potap Kolenkhov, who is ostensibly dancing instructor to Alice's little sister, Essie (Ann Miller, just 15 when the movie was shot), but really just comes around for the free meals. The Russian has an opinion about everything, and that opinion is always that, "It stinks" -- up to and including the skills of his student.

Dub Taylor plays Essie's husband, Ed, who plays the xylophone (as did Dub in real life, which is how the Alabama football player landed the role). Mary Forbes plays Kirby's wife, a classic snooty matronly type -- big bosom and even bigger head. Her conversion to the charms of the Vanderhof clan's goofy ways is still pending by the time the credits roll.

Donald Meek, a character actor whose look exactly matched his name, pops up as Poppins, an accounting drone whom Vanderhof recruits to leave behind his drudgery and come live with them, a few minutes after they've just met. He ensconces himself in the basement with Alice's father and uncle to practice light mad scientist stuff.

"You Can't Take It With You" is a fast-paced film with lots of one-liners and rapid-fire dialogue. You could practically classify it as a slamming-doors farce. It's amusing, charming and occasionally touching, though the Jimmy Stewart and Jean Arthur characters are throwaways in my view. The movie has to be regarded as one of the weaker Best Picture winners.